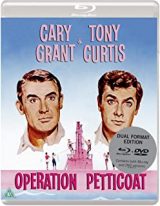 Eureka bring us a post war classic with two of Hollywood’s finest comedy actors, from the pens of Paul King, Joseph Stone, Stanley Shapiro, and Maurice Richlin who were nominated for the Academy Award for Best Writing. Directed by a family favourite Blake Edwards (Breakfast at Tiffany’s, Days of Wine and Roses, The Pink Panther, The Return of the Pink Panther) who gets the best out of his actors and actresses for this WWII comedy classic.

It is 1959 and Rear Admiral Matt Sherman (Cary Grant, Charade, To Catch a Thief, Alfred Hitchcock’s North by Northwest, The Philadelphia Story) turns up early at the dock of his old submarine the Sea Tiger just before it is sent to the scrapyard. In his old cabin he gets out his personal ships log and starts to read out the exploits of her and her crew.

1941 December the 10th, America has joined the War and are fighting the Japanese in the Philippines and the enemy is bringing the fight to the Americans and attack and sink the Sea Tiger while she is at Cavite Navy Yard. The base commodore, believing the sub lost sends most of the crew on new assignments. But Sherman is determined to get into the war and not let the Sea Tiger die a virgin.

Sherman is promised the first available man to help with his re-float and refit but he wasn’t expecting an admiral’s aide in the guise of Nick Holden (Tony Curtis, The Defiant Ones, The Vikings, Some Like it Hot, Sweet Smell of Success) a man with no real Navy abilities but he does have one very good skill, finding and aquiring anything you need along with Ramon Gallardo (Clarence Lung, Secret Agent X-9).

The Sea Tiger lives, just and she heads for Darwin, Australia but first they head to Marinduque. This is where the fun gets an upturn in the way of five stranded female Army nurses Lt. Dolores Crandall RN (Joan O’Brien, The Alamo, It’s Only Money), Lt. Barbara Duran RN (Dina Merrill, A Nice

With plenty of well known TV faces (Due to this film) and two great stars of the silver screen they will look ace on your wide screen this festive period.

Operation Petticoat is available on Dual-Format.