5 stars of the best anime.

1988 We have been singing “Free Nelson Mandela” at Wembley Stadium and Margaret Thatcher is sizing up Arthur Scargill.

Then it’s announced that Akira is to be released not only at the cinemas but also in IMax theatres, where you feel the full benefit of the 70mm negatives, which demonstrate an unbelievable level of detail, a ground-breaking feat, not only in the animation but also in the media they use such as diamond paint, and it does make a huge difference.

Katsuhiro Otomo’s vision; (I have spent ages collecting the comic in English and cannot wait to see his vision on the big screen). 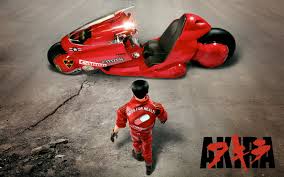 What I got was a new view on Neo Tokyo, after the third world War started mysteriously and with no provocation. Tokyo has rebuilt itself and now it looks spectacular and scary, as the military rule the city but motorbike gangs rule the roads, fighting for territory they ignore every other road user. 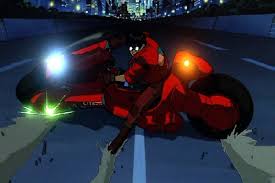 Kaneda leads a small gang trying to make a name, so they attack any other gang in the vicinity of their local bar. They use violent methods which are equally used by their quarry.

Until the runt of the litter Tetsuo Shima suddenly crashes into what he thinks is a young child, but this is no child; it’s one part of a military secret weapon.

The Colonel turns up and whisks Tetsuo away leaving Kaneda and the rest of the gang protesting profusely about their innocence.

Tetsuo is experimented on and is found to have acquired the same powers as their other experiments (the escapee he ran into). Now he has what appears to him as super psionic powers and he is compelled to find out the source of this boon. 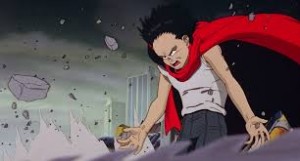 He embraces these new powers to the dismay of Kaneda and Kei, who believe they are the only ones in the city that can save the wayward Tetsuo, who is hell bent on finding the mythical Akira.

A titanic struggle ensues between all parties especially Kaneda and Tetuso as he he goes power crazy; hell bent on the removal of all except for him, even the person who took him under his wing, Kaneda. 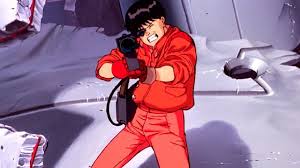 Tetsuo cannot contain his exponentially growing powers and we see the realisation that he is still a young boy who needs a friend, but it is far to late for all concerned.

The battle for Neo Tokyo is well under way as the elusive Akira is resurrected by Tetsuo and the mysterious military experiments who were there the first time round. Kenada and Tetsuo must find out which one of them is in control and who ultimately understands the universe. 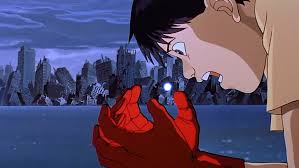 This is a classic in the making and will stand the test of time.

When I was young I was gripped with anime when as a child I watched Marine Boy and then SDF-1 Macross but this was an eye opener and still is today.

Akira is Available on Video, DVD and Blu-ray