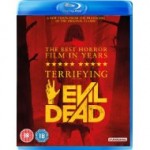 Evil Dead is a remake of the cult horror film The Evil Dead, revealed to the world in 1981. This new version bears all the signatures of the original, directed by Fede Alvarez, a relative newcomer, but produced by Sam Raimi and Robert G. Tapert (The Evil Dead, Hercules: The Legendary Journeys) , the maestros responsible for the first incarnation.

It is also produced by the mighty Bruce Campbell who played Ash in the original film and who makes an un-credited appearance in this one.

The story-line is, of course, very similar to that of the first, but with enough differences and little twists to make it feel fresh yet familiar at the same time. 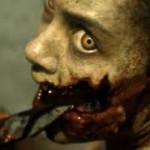 Five friends gather at a log cabin in the woods. Mia (Jane Levy – Suburgatory) who is there to undergo cold turkey, her brother David (Shiloh Fernandez –  Red Riding Hood, Deadgirl) who is there to offer moral support and brings his girlfriend Natalie (Elizabeth Blackmore – Legend of The Seeker) and their two close friends Olivia (Jessica Lucas – Cloverfield, Melrose Place) and Eric (Lou Taylor Pucci – Beginners, The Story Of Luke).

After investigating a strange smell emanating from the cellar, the friends make a gruesome discovery and happen upon a mysterious book, wrapped up in plastic and barbed wire, from which Eric foolishly reads, unleashing a chain of events that no-one (least of all the viewer) can be prepared for. 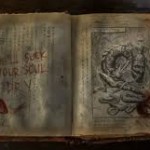 What follows is a master-class in the making of a truly disturbing horror film, with tension and plenty of gore at every turn. These days the special effects are good enough that the camera never needs to turn away at the crucial moment, there is no implied action here, if it happens you see it in glorious detail.

I am not normally squeamish and even I had to look away a couple of times. In every way this is an 18 certificate, as it should be and it’s about time a good “video nasty” hit our screens again. Bravo one and all!

With the addition of the plentiful special features thrown in for the die-hard fan, this is a must see for fans of the genre and of the original release.