4 Star Epic Western with the smell of real life Wyoming 1890.

Set in the established burgeoning America, towns and cities are starting to get flooded by migrants from Eastern Europe, much to the dislike of Land owners and especially the Stockholder Association, who see these farm settlers as vermin or worse. 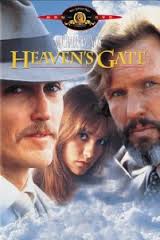 Set around the dysfunctional friendship between James Averill (Kris Kristofferson, Blade franchise) and Billy Irvine (John Hurt, Alien).  We see them graduate from Harvard college Cambridge Massachusetts and the grandeur of those hallowed halls.

But twenty years later we see a bearded Averill slumped drunken on a train as it pulls into Casper Wyoming.

Averill has power but has dumbed down his lifestyle as he prefers the simple life rather than the trappings of his birth right.

Director Michael Cimino, (Thunderbolt and Lightfoot, Deer Hunter) has gone for realism and the shooting of the scenes must have been a nightmare as he 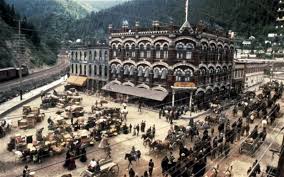 shows bustling streets and shops and roads filled with people and carts (horse-drawn and hand pulled). This is the first time Averill sees the face of the racism that is gripping the State, as he witnesses the merciless beating of a family which he cannot ignore.

He encounters his old friend Billy in his old club which he was blackballed out of years before, Billy is drunk (his usual state) and he has just walked out of a vote by the leader of the Stockholders Association Frank Canton, (Sam Waterston, The Killing Fields, Law and Order 2004) to take control of the situation of these immigrants and produce a list of 125 names and employ 50 men to eradicate the named with a bounty of $50 for each killed or hanged.

One of those hired is Nathan D. Champion, (Christopher Walken, Deer Hunter, Pulp Fiction) who shares a love interest with Ella Watson,(Issobelle Huppert, The Piano Teacher, 8 Women) and Averill and this causes the displeasure of the directors favourite John L. Bridges, (Jeff Bridges, Iron Man, True Grit 2010) who owns the local Bar in Sweetwater where the emigrants are holed up.

With Frank Canton moving in for the kill it is revealed that Ella and most of the townsfolk are on the list Champion deserts for the love of Ella.

What ensues is a titanic battle by the scared emigrants but what else can they do but fight for their and their families futures.

This is an awesome film in length and construction, of the characters and undertakings of the scenes and the battle for life and freedom

This is an epic in all senses at 3hrs 25 mins long but it is well worth the effort as you are treated to a proper film not the usual Hollywood eye candy.

Available to buy on DVD or in selected UK cinemas now