This is a pretty enjoyable film and I have given it 3.5 stars. 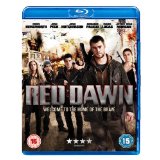 Red Dawn is a remake of the 1984 film of the same name (starring Patrick Swayze and Charlie Sheen).

The basic premise of the film is almost identical, but it has been brought up to date with the introduction of North Korea as the main protagonist. After an unexplained blackout, our heroes Jed (Chris Hemsworth – Thor, Snow White and The Huntsman) and Matt (Josh Peck – Wackness), two brothers from Spokane, Washington awaken to see North Korean paratroopers descending from the sky. 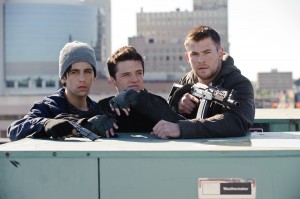 After the brutal execution of their father, the boys swear vengeance and begin to form a guerrilla unit, with members including Robert (Josh Hutcherson – The Hunger Games) and  Daryl (Connor Cruise – Seven). As a U.S.marine, Jed is naturally appointed leader and trains The Wolverines (named after their school mascot) to lead attacks against Captain Cho (Will Yun Lee – Die Another Day), the leader of the North Korean Unit in their area.

In spite of the inevitable disagreements and in-fighting, the Wolverines begin to make their presence felt.

As the teenagers wage their war, people begin to gain inspiration and as they find out when they meet Sergeant Major Andrew Tanner (Jeffrey Dean Morgan – Watchmen, The Possession) they are by no means alone in their attempts to liberate the United States.

Although the characters all share their names with the original film, several of them are used in a different context and meet different fates. As a result of this, Red Dawn 2012 feels much more modern, less glossy and more gritty and down to earth. This seems to be in large part thanks to the director Dan Bradley, much better known as the stunt coordinator on The Bourne Series, Swordfish and many other productions, who makes all the gun action flow seamlessly. 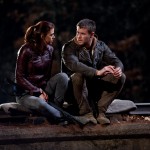 The script writing, acting and direction are all excellent and as remakes go, this is very good. The feel has been changed sufficiently that it doesn’t appear dated, and even if you have seen the original film this is still well worth a watch.

This tale of teens defending their home against an invading enemy is still as relevant (maybe more so) as it was when this story was first filmed nearly thirty years ago and will make a good addition to any collection.