This is what it is, “the fifth and final instalment in a four part trilogy”. With its forked tongue firmly in someone else’s cheek or ear-hole. 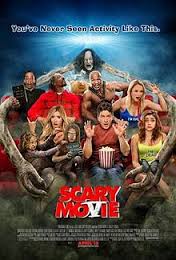 We start with Charlie Sheen, (Hot Shots) and Lindsay Lohan, (Herbie Fully Loaded) in a bedroom scene with full Benny Hill music and their visitation of Paranormal Activity which gives the premise for the film as his three kids go missing after his untimely demise.

Ja’ Marcus, (Snoop Dog, Bad Boys II) is in the woods where he and his cousin find the three children.

This introduces us to Dan Sanders, (Simon Rex, Scary Movie 3 and 4) and his wife Jody, (Ashley Tisdale, High School Movie) who inherit their lost nieces and nephew.

It soon comes apparent that they have brought something else with them into their home, as the ever growing number of security-cameras prove the existence of spectral demon. 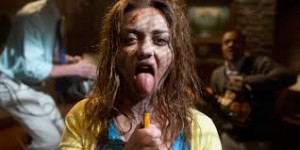 We see a plethora of movie spoofs such as Black Swan, Paranormal Activity, Cabin in the woods, Evil Dead, Insidious, Inception and Dan’s main thread through the film as his job as a geneticist Rise of the Planet of the Apes.

This is a great yarn that kept me laughing all the way through it and if you sit through the credits there are some bloopers  running through it as well as a little extra bit on the end.

A great addition to the franchise, if you love the others you won’t be disappointed with this, even-though it parodies films that were not originally horror films but it does enough to keep the film spotters active.