4 stars for this disturbing yet compelling piece. 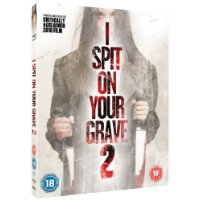 I Spit On Your Grave 2 is directed by Stephen R. Monroe and is the sequel to his 2010 remake of the film I Spit On Your Grave. Unlike the remake, which was pretty much word for word the same script as the original film, this sequel has new writers on board, Thomas Fenton (Saw IV) and Neil Elman (No Way Up).

I Spit On Your Grave 2 tells the story of Katie (Jemma Dallender – HollyOaks, Community), an aspiring model, who has moved to New York to find fame. Desperate to update her portfolio, she calls a number she finds on a flyer, advertising free photographs.

It is here that she first meets the three brothers, Georgy (Yavor Baharov – Tilt, Double Identity) the instigator of the whole affair, Nicolay (Aleksander Aleksiev – Frank’s Inertia, The Paraffin Prince) the drug addict and Ivan (Joe Absolom – Doc Martin, EastEnders) the elder brother who is always left to sort out the mess.

Her refusal to remove her clothes for the shoot soon spirals into a horrifying chain of events, as she finds herself kidnapped, raped, beaten and abused and humiliated in just about every possible way. Having somehow survived this ordeal against all the odds and realising that getting help will be difficult, she begins to plot her revenge.

The second stage of this film, the revenge, is extremely well done, quite clever, as Katie throws back the words of each of her tormentors in order to deal out her own unique and brutal form of justice.

Although the script and the acting are all very good, what really makes this film is the performance by Jemma Dallender. A relative new-comer, her commitment to this difficult role is astonishing. She is forced to spend a lot of time in very compromising situations and carries it all off believably. This is one film that cannot have been any fun to make and I sincerely hope that it will be the start of great things for her.

Fans of the original film or of the remake may find some parts of the sequel milder, specifically the rape scenes, but I suspect many people will not find that a bad thing. Although this is not a horror film as such, it is nevertheless extremely uncomfortable to watch, both the initial crimes and the payback as well and pulls no punches in it’s explicitness.

All in all this is a very good film, highly recommended and well worth adding to your horror collection.

I Spit On Your Grave 2 is available to buy now on DVD and Blu-ray.