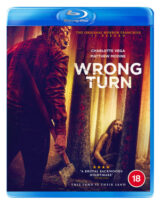 It was in 2003 that we first encountered the ‘Wrong Turn’ writings of Alan B. McElroy (The Vampire Diaries (TV Series)) and now eighteen years later he is the one to wield the pen once again, in this 2021 reboot about a group of friends that tread where they shouldn’t. Directed by Mike P. Nelson (Summer School, The Domestics). Sit back and enjoy the gory deaths.

The lucky ones die early.

Small town Virginia USA and Scott Shaw (Matthew Modine, Full Metal Jacket, The Dark Knight Rises, 47 Meters Down) is looking for his missing daughter who came to the town six weeks earlier to walk the Appalachian Trail with her five friends. He doesn’t get much help from police Chief Abernathy (Richard Hagerman, Dark Waters). The hotel owner Aileen (Amy Warner, Dark Waters) gives Scott the reason why the Chief is so uninvolved.

The quieter it is, the more he gets to fish.

And when he enquires at the local watering hole, patron Nate (Tim DeZarn, The Cabin in the Woods, The Texas Chainsaw Massacre: The Beginning) doesn’t give Scott much hope either, as this sleepy town holds a dark secret.

If they’re lost in the woods, you might as well go home.

some R and R out in the beautiful wilderness under the stars on the Appalachian Trail. There is a slight hitch in their plans as Darius has a puncture, and it is the practical Jen who sorts it out, and as we know all scary films start with someone watching from the forest.

The group lodge at Aileen’s hotel and then head for the local bar, where Nate takes offence at all the useless Hipsters coming through his town and not contributing to the economy. As Jen points out to Nate that they are all

gainfully employed, except Jen who has two Masters, and when she finally decides what she is going to do she will also contribute to society. She also points out that Nate has yellowing of the eyes and maybe he should visit a doctor. This unnerves Nate who leaves them with some sage advise.

Piece of advice, keep to the marked trail, the land here can be unforgiving. 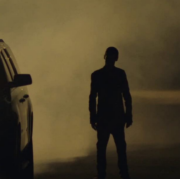 After the bar they head back to the hotel when they spot someone peering into their vehicle, this is where we see Adam’s demeanour, and he hates hillbillies as he acts all superior and shoos the guy away like he would a dog. After throwing a bottle at the unknown loiterer they

vanish into the night mist. They all head back to Aileen’s for a good nights sleep ready for the long day ahead on the trail tomorrow (Do you get that Gary?).

Bright and early next morning Jen is out jogging when she comes across a young woman (Edith) making wristbands and with her is a young shy girl named Ruthie. Jen takes a shine to the bracelets and buys one before heading to meet the others to start their adventure.

The law is the law, there is only truth and lies.

Soon Darius the history buff is showing them through the forest and notices that there is a well-preserved civil war fort just off the trail (but you were told not to stray off the trail), and they discover the existence of the ‘Foundation’ a group of survivalists dating back to the 1859. Don’t go in the woods they once said, and they were right, very soon the bodies will be rolling and the fear factor will go through the roof, especially after they meet Venable (Bill Sage, American Psycho, EvenHand).

Oh, and stay on through the credits folks.

Wrong Turn is available on Blu-ray, DVD and Amazon Prime