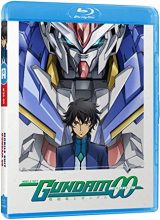 Millions Die, But There is Still Love in the Vaccum. 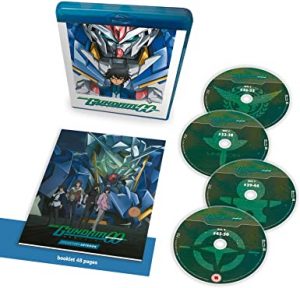 Four years after the events of Part 1, there still isn’t peace on Earth, well not to the ones in the know, Celestial Being and Katharon rebel group. To the masses though the Federation is running things smoothly with the aid of A-Law (Autonomous

Peace-Keeping Force) who rule with an iron fist and actively seek out Celestial Being and the rebels. On one of these raids, a now graduated Saji Crossroad is working in space but unfortunately he is working alongside a suspected Katheron member and he is arrested and put to work on the Proud high gravity industrial block with other Katheron prisoners.

“If a man ain’t willing to work, he ain’t eating”.

Katheron tries to rescue its comrades but A-Law (Ahhlaws) are hot on their heels and we now see their tactics, in that they deploy deadly automatons that wipe out anything fleshy that moves. On the

industrial block is Celestial Being Gundam pilot Setsuna F Seiei, who manages to rescue Saji with the help of other Gundam pilot Tieria Erde. When they get back to their base ship the Ptolemaios II Saji is not impressed with Setsuna as he blames Celestial Being for killing his girlfriend and members of his family.

“We can’t change the past, but we can fight for the future,”

Despite the ungrateful Saji, Satsuna carries on his mission to recruit members to the Celestial Beings, One is an old member that has gone off the rails,

Sumeragi Lee Noriega who is a brilliant strategist. The Celestial Beings are missing a crucial member, the sniper. Setsuna has a man in mind, Lyle Dylandy the twin brother of Neil Dylandy the former ‘Lockon Stratos’.

“What should we pass on to this generation?”

Even with the full team together Celestial Being take the fight to the A-Laws to bring real peace to the Earth sphere, but as we all know this is not going to run smoothly as the modified Innovators have infiltrated all factions and with their heightened telepathic abilities they are steering everybody to their plan.

“I will reform myself!”

Mobile Suit Gundam 00 is a complex fight for supremacy under the name of peace. With slick graphics and animation this is a treat for the eyes as the space battles rage and Gundams go up against ever more upgraded Mobile Suits.

“You will witness the Reformation of the World!”