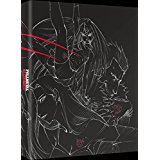 Fullmetal Alchemist is adapted from the manga of the same name, written by Hiromu Arakawa and was first shown in 2003. The series was produced by the animation studio Bones (Eureka Seven: Astral Ocean, Space Dandy) and directed by Seiji Mizushima (Shaman King).

“Humankind cannot gain anything without first giving something in return. To obtain, something of equal value must be lost. That is alchemy’s first law of Equivalent Exchange. In those days, we really believed that to be the world’s one, and only truth.”

Edward (Vic Mignogna – Free! Eternal Summer) and Alphonse (Aaron Dismuke – Ping Pong: The Animation) Elric are two young brothers, who live happily with their mother and have an interest in alchemy due to their absent father’s career. They are good friends with their neighbours, Winry (Caitlin Glass – The Future Diary) and Pinako (Juli Erickson – One Piece) Rockbell, producers of Automail.

All of their lives are turned upside down when they return home one day to find their mother has collapsed and subsequently died. Unable to accept her death, they turn to alchemy and commit the ultimate crime. They attempt to use human alchemy to resurrect their dead mother.

It is a disaster and they pay a heavy price, as demanded by the law of equivalent exchange. Alphonse disappears completely and Edward loses his leg and then his arm in payment to bind Alphonse’s soul to the only thing available, the suit of armour in the corner of the room. 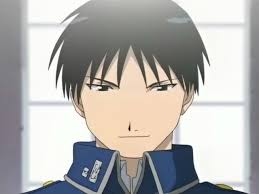 Whilst trying to contact their father, they have attracted the attention of the military in the form of Roy Mustang (Travis Willingham – Naruto: Shippuden), who arrives and urges the boys to consider becoming State Alchemists. Determined to learn enough alchemy to put themselves back together, once Edward has been fitted with Automail, the boys head off to take the exams and join the military.

They hope to find the fabled Philosopher’s Stone, which is said to enable the user to bypass the law of Equivalent Exchange. This is the tale of that quest. 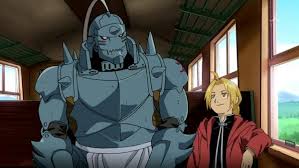 Fullmetal Alchemist was universally well received upon it’s release and it’s not hard to see why. It’s a great story, well written, which is full of intelligent comedy, but can occasionally make you cry as well as laugh. The characters are well developed and relatable and the story keeps you guessing right to the very end. I would thoroughly recommend this to any anime fans, this is a must own.

“Shorty?! Could a shorty do this?! What else you want to call me: a half-pint bean-sprout midget?! I’m still growing you backwater desert idiots!”