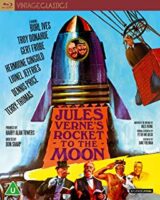 The age of discovery, where names and fortunes were made, under the rule of Queen Victoria. Inspired by the pen of the science fiction writer Jules Verne (20,000 Leagues Under the Sea, Around the World in 80 Days, Journey to the Center of the Earth). It is brought to life by director Don Sharp (The Thirty Nine Steps, Bear Island, Rasputin: The Mad Monk) who brings in a big American film star to head this most British of adventures, great fun for the whole family.

It is a time of wonder as the Victorian gentlemen try to impress their peers and some, the Queen. Amongst these are the Duke of Barset (Dennis Price, Kind Hearts and Coronets, I’m All Right Jack) who is going

to be the first person to have his whole mansion lit by electricity (not), and Sir Charles Dillworthy’s (Lionel Jeffries, Chitty Chitty Bang Bang, The Prisoner of Zenda) suspension bridge which collapses as soon as the Queen cuts the tape. Dillworthy blames his associate Captain Sir Harry Washington Smythe

(Terry-Thomas, It’s a Mad Mad Mad Mad World, Those Magnificent Men in Their Flying Machines or How I Flew from London to Paris in 25 hours 11 minutes) for using inferior products in the construction of his bridge. Meanwhile, Professor Siegfried

In America entrepreneur Phineas T. Barnum (Burl Ives, Day of the Outlaw, The Big Country, Our Man in Havana, Cat on a

Hot Tin Roof) and his partner General Tom Thumb (Jimmy Clitheroe, Somewhere in Politics) are making a swift exit from the country as his greatest show on earth burns to the ground leaving him bankrupt, he must find a new opportunity and it most probably lies in England.

Von Bulow has also made the trip to England to show off his extremely powerful explosive to the scientists and entrepreneurs of the Royal Society, and it just so happens that P.T. Barnum and General Thumb are in attendance. When Bulow suggests that his Bulowvitte could send a projectile to the moon P.T.B is soon on the case to raise funds for this project and obviously some money for himself as he suggests that the sleeping diminutive Tom Thumb be the pilot for said projectile.

Sir Charles Dillworthy is tasked with designing a rocket to take a man to the Moon, P.T.B arranges funding, and he charges Smythe with being the treasurer of the project (what could possibly go wrong?).

There was Nothing said about bringing them back!

Meanwhile, in France the news has spread about the rocket to the Moon and Gaylord (Troy Donahue, A Summer Place, The Godfather: Part II) must be a part of this, as he has already designed a rocket that will take a man to the Moon (and back). He has a dilemma, the love of his life Madeline (Daliah Lavi, Casino Royale, Ten Little Indians) is in love with him and one of the richest men in France Henri (Edward de Souza, The Spy Who Loved Me, The Golden Compass), what a mess, but science must come first, however Madeline comes a very close second and they both head off to England in his hot-air balloon.

Jules Verne’s Rocket to the Moon is a yarn for the whole family in this timeless adventure comedy, with British family favourites and an American Oscar winner to head the show, you’ll have nearly two hours of great fun.

Jules Verne’s Rocket to the Moon is available on Blu-ray, DVD and Amazon Prime

INCLUDED WITH THE FILM: