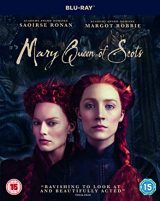 From award winning theatre director to the wide screen Josie Rourke (Much Ado About Nothing) brings us the clash of two titans in female and world history. The clash between Elizabeth I the Protestant Queen of England and Mary Stuart the Catholic Queen of Scotland. She concentrates on how these Queens are but pawns of the men who seek to rip that power away from them, through devices or marriage.

Sixteenth century Scotland is a Catholic haven due to its young queen Mary Stuart and she is sent to Catholic France while turmoil of the English Protestants fight for power. At 15 she marries the heir to the throne of France. At 18 she is widowed and returns to her native Scotland and Hollyrood Palace in Edinburgh. The Protestants have been succsesful in getting Mary’s half-brother James, Earl of Moray to govern Scotland in Elizabeths name. But now she is back as Queen of Scotland.

It is a cold but respectful reuniting with her brother James, Earl of Moray (James McArdle, Star Wars: Episode VII – The Force Awakens) but it is pointed out that Lord Bothwell (Martin Compston, Doomsday) is her sworn protector. Mary (Saoirse Ronan, The Grand Budapest Hotel) wants to get on with her cousin Elizabeth (Margot Robbie, Suicide Squad) and wants her to name her as her succsessor, but England will never let a Catholic sit on its throne.

There is intrigue and plotting as Elizabeth sends her lover to wed Mary and others that try to drum up Protestant ferver to overthrow the Catholic queen.

There are well hidden performances from David Tennant (Broadchurch, Fright Night) as John Knox and Guy Pearce (Memento, L.A. Confidential) as William Cecil, but all in all this is an historical piece and drama. There is no need to know who menstruated first, when there is a kingdom at stake. 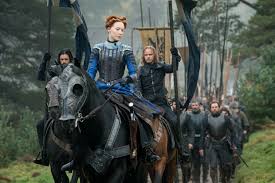 Mary Queen of Scots is available on DVD and Blu-ray