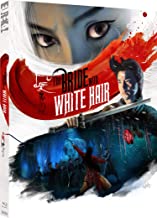 From writer/director Ronny Yu (The Occupant, Bride of Chucky, The 51st State, Freddy vs. Jason) comes this wuxia fantasy tale from the 17th century. Loosely based on the main character from Liang Yusheng‘s novel Baifa Monü Zhuan, we follow his young life and into adulthood and all the trappings that brings.

There is a long held belief that high in the mountains of the Shin Fung Mount a flower grows, that can turn white hair to black, thus turning back time and granting eternal youth. This is just one of those tales in the mountains history.

What is more important than your Emperor?

The Most important person is a woman…In my Heart!

The Forge. A young boy distracts himself as his master Taoist Ziyang of the Wudang Sect (Pau Fung, The Legend of Drunken Master, The Phantom Lover) and mentor talks about his training in the Swimming Dragon Moon-Splitting Sword style passed onto the young Zhuo Yihang (Leila Tong, City Hunter. Big Blue Lake) who is being groomed to be a chivalrous swordsman. But he is much more interested with life and all its trappings. As he grows he will have many scrapes with the law and his master and the other seven clans.

When on one of his adventures as a young boy rescuing a kid goat he encounters two of his fears, lightning and wolves, the first is solved by a young soldier Wu San-Kuei (Eddy Ko, Kung Fu Conspiracy, Darkside of Chinatown, Lethal Weapon 4, The Martian) who teaches the young boy how to drink wine.

The second, the wolves are sorted out by a strange young girl with a flute that charms the wolves and keeps the young boy safe. 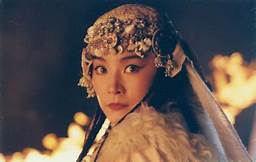 Now Zhuo Yihang (Leslie Cheung, A Chinese Ghost Story, Happy Together) has grown up and has the weight of the clans upon him, as an evil cult is raiding across their borders. He is tasked with leading the eight clans against the conjoined twins Male Gei Mou-Seung (Francis Ng, Once Upon a Time in Triad Society), Female Gei Mou-Seung (Elaine Lui, The Red Wolf).

he white witch Lian Nichang (Brigitte Lin, Police Story, Swordsman III: The East Is Red, White Crane Woman) and her whip that can take the skin from a snake.

A Chinese Romeo and Juliet style tragedy, with added martial arts and brilliant swordplay, The Bride with White Hair is a great fantasy romp that will have you enthralled as the story unfolds.

The Bride With White Hair is available on Blu-ray