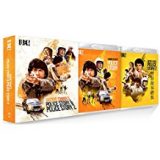 Eureka brings us two of Jackie Chan‘s (Drunken Master, City Hunter, Jackie Chan’s Who Am I?, Rush Hour, Shanghai Knights, Police Story: Lockdown) most iconic films, that show off his unique style of action, comedy and martial arts. After spending years as an uncredited extra, he suddenly became an overnight success in the late 1970’s and the legend of Jackie Chan was born. He is a writer, director and an unsurpassed stunt performer who has become loved in the Asian and Western cinemas.

1985 Hong Kong and Police Story heralds the dawn of the rise of Jackie Chan as a Western action hero. With Police Story I & II we see Chan’s finest stunt action work which he is now famous for and this franchise has spawned six films ranging from 1985 – 2015.

Officer Chan Ka Kui (Chan) is a detective in the Hong Kong police force and a member of “Operation Boar Hunt” a task force brought together to take down drug/crime lord Chu Tao (Chor Yuen, The Seventh Curse, Hong Kong Graffiti). Headed by Supt. Raymond Li (Kwok-Hung Lam, Project A 2), he sets up a sting for Tao who is holed up in a shanty town just outside Hong Kong.

Chan is successful in apprehending Tao and they need his secretary Selina Fong (Brigitte Lin, Lady in Black, The Eagle Shooting Heroes) to testify against him but this does not go to the way Chan wants it as

Toa does not want that to happen. This puts Chan’s relationship with May (Maggie Cheung, Hero, Comrades: Almost a Love Story) under great strain as he fights to protect his ward (Great comedy).

Police story Two continues the story of Chan and the police force against Tao and now in 1080p and near original length for both films for the first time in the UK this is a must own for all Jackie Chan fans. 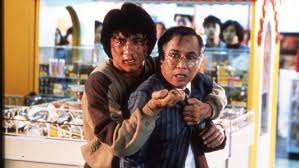