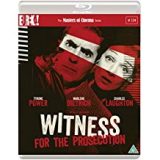 Adapted from Agatha Christie’s book of the same name, adapted and directed by Billy Wilder (Sunset Boulevard, The Seven Year Itch, The Spirit of St. Louis, Some Like It Hot, The Apartment) and bringing 6 Academy Oscar nominations. This courtroom drama is a shining example of Wilder’s work and now that it has had the Masters of Cinema #194 treatment, it is a must for any fan of this genre. With all the twists and turns of a Christie book, this is a riveting film from start to end credits, where you get the original “don’t tell your friends about the ending” warning.

Sir Wilfrid Robarts (Charles Laughton, Spartacus, Salome, The Hunchback of Notre Dame) has just spent two months in hospital after a heart attack and he is being looked after by the strict nurse Miss Plimsoll (Elsa Lanchester, Mary Poppins, Passport to Destiny). He is returning to his home and place of work as a QC Barrister, he sweeps in and his employees are there to welcome him back, but he is not a sentimentalist and he summons his long serving chief clerk Carter (Ian Wolfe, The Lost World, Moonfleet) who is under strict orders not to take on cases that would cause Sir Wilfred any stress.

Miss Plimsoll knows nearly all of Sir Wilfred’s tricks to keep his cigars and brandy which he has been banned from, but he is as wily as an old fox. It is then that solicitor Mr. Mayhew (Torin Thatcher, Drums of Africa, Helen of Troy) walks in with his client Leonard Vole (Tyrone Power, The Mark of Zorro, Jesse James, In Old Chicago) who says

that there is a possibility that he might be arrested for the murder of his friend Mrs. Emily Jane French (Norma Varden, The Sound of Music, Gentlemen Prefer Blondes, Strangers on a Train) who had been found dead by her maid Janet McKenzie (Una O’Connor, Bride of Frankenstein, Little Lord Fauntleroy). Mrs French had suffered a blunt blow to the head and the house had been ransacked at about 10pm, but Mr Vole swears 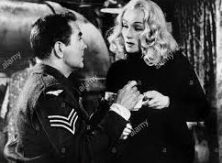 he went home to his wife Christine (Marlene Dietrich, Around the World in 80 Days, Judgment at Nuremberg, Destry Rides

Again, The Devil Is a Woman) at 9.26pm sharp. His wife is his sole alibi and she is a cold and calculating unlike Leonard who is an affable  friendly man with a history of moving from job to job whilst trying to sell his home help inventions.

Sir Wilfred has to defend Leonard against the prosecution QC Mr. Myers (Torin Thatcher, Great Expectations, Helen of Troy) who has far more to play with than Sir Wilfred who never likes to lose (No Spoilers) a case, so sit back and let the evidence flow before you.

The Masters of Cinema have delivered a cracking film that is now up to date.

Witness For The Prosecution is available on Blu-ray