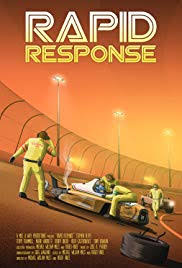 Rapid Response is the perfect way to celebrate a lifetimes work that has improved thousands of racing drivers lives over the last 50+ years. Americas speedway and karting heroes face death at every venue. This documentary tells the story of the man who changed all that and how he did it with his team of dedicated physicians and first responders.

This cinema experience is for every petrol-head, that has a strong stomach and not for those faint of heart.

If like me, you became a petrolhead at a young age (I grew up down the road from Silverstone, UK, where  neighbours were building formula cars in their garages) this documentary will thrill and enthral you (and shock you).

Similarly there was a young man that was fascinated by the Indy Kart and Speedway. Stephen Olvey saw the 1955 Indy 500 where his hero Bill Vukovich was killed in a horrific accident and he states that your hero would last two to three weeks and 1 in 7 racers would die doing the thing they loved. 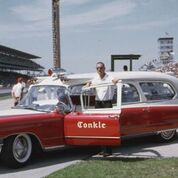 In 1964 again at the Indy 500 another fatal accident kills Eddie Sachs and Dave MacDonald and after it was all cleared up the race continued and A. J. Foyte wins. This was all when the safety vehicles were sponsored by a local funeral directors with just a gurney and a bottle of oxygen. But Stephen was still hooked on the high speed events and he had aspirations of becoming a racer until his father persuaded him to go to collage and become a doctor.

This documentary follows Stephen and how by chance he became the first Dr. on a racetrack all because of Dr. Tom Hanna who would inspire to change the face of Speedway saftey and allow drivers to cheat death.

Even today it is a life and death high octane sport that still teaches the rapid response crews lessons. With the greats of the day giving their time to give us an in-depth insight into their lives on the line at 200 mph.

A fifty-five year journey to save lives on the track. 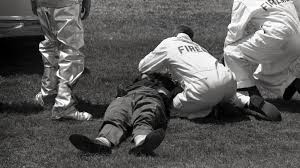 Rapid Response is now in cinemas.