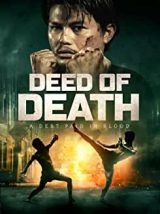 Cinematographer turned writer/director Areel Abu Bakar brings a hard hitting tale of the family is all and they will do anything to protect that. Showing that the Malay Silat martial art is not to be messed with, Deed of Death is Hard Hitting, High Kicking and High Octane.

Men come from the land. Therefore, walk on it with humility before you are withered with time. The land will bring you wealth, if it is taken care of. Yet it can also lead to conflict and war, one without end.

Pak Nayan (Namron, One Two Jaga, Redha) is a man of humility and dignity, rare qualities in a man, but he also has a fault, pampering his youngest son Mat Atrip (Fad Anuar, Abang Long Fadil 2, KL Gangster: Underworld (TV Series)) which has led to him being wayward, betting on illegal fights and taking part in the illegal sport of street racing, much to the irk of his older sister Fatimah  (Feiyna Tajudin) and older brother Ali (Khoharullah Majid). They are blessed with living in the beautiful countryside of Malay, which is much sought after, especially by loan shark Haji Daud (Faizal Hussein, Bunohan: Return to Murder, Gerak Khas the Movie II) who has been obtaining the surrounding properties through people failing to meet his extortionate interest rates.

Haji Daud doesn’t soil his hands himself, he has his goons do all the dirty work, and today they are at Pak Hayan’s house with the deed (Geran) to his house, which Mat Atrip had stolen to help as a stop gap to pay off his gambling debt. Mat Atrip did not expect Haji Daud to go after his fathers’ property so quickly, because he didn’t know that his father and Haji Daud have a shared history and Haji Daud is a very greedy man.

After the goons barge their way into Pak Nayan’s house, it is Fatimah that gives them a piece of her mind, and when that doesn’t work, she shows them the error of their ways and displays her expertise at Malay Silat martial art. This leads to the goons giving the Nayan’s a one-week reprieve on paying the debt. Pak Nayan believes that one family members’ debt is the families’ debt, and he says they will work it out.

Meanwhile, Mat Atrip can’t help himself, and he is still gambling and losing. It is as if somebody wants him to get deeper in debt… He gambles on street fights and when he does have some money he and his side-kick Mi (Salehuddin Abu Bakar, Mael Lambong) indulge in street racing, which also gets him in more trouble with the Daud family. Can the family sort out their wayward sibling? Only with fists and feet it seems.

Deed of Death (Geran) is a high octane journey into the art of Malay Silat where no quarter is given. Just amazing skills. A must for anybody that is interested in any Martial art. Awesome.

Deed of Death is available on Digital Formats and Amazon Prime