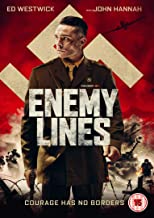 From producer Tom George (Madness in the Method) comes his first writing credit and along with relative newcomer Anders Banke (Frostbitten) takes on the directors mantle in this WWII drama about the struggle to bring the war to a rapid end.

43 and WWII has spread all across Europe and further afield. All factions are working to find a concise way to bring the war to an end and victory. The Nazis are working on something and so are the allies who need to get all the top scientists working on their project. 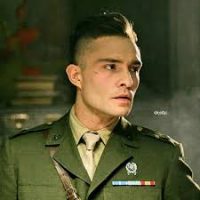 This is why US General McCloud (Corey Johnson, The Bourne Ultimatum) gets in contact with Colonel Preston (John Hannah, Sliding Doors, Four Weddings and a Funeral, The Mummy, The Mummy Returns) along with US Major Kaminski (Ed Westwick, Son of Rambow, Chalet Girl) who is going to lead a team of British commando’s on a rescue mission to get a top rocket scientist and get him to the U.S.A. to help the war effort for the Allies as a free man.

The scientist, is one Dr. Fabien (Pawel Delag, Schindler’s List, Quo Vadis) who is being kept at a secret Nazi base in remote Poland. The one thing the allies have in their favour is that the Germans allow the Dr to visit his wife and child one night a month. This will be the team’s opportunity to grab the Dr and spirit him away.

But there are always problems to every plan and their passage to Poland gets them there too late for their intended rescue. Now they must adapt and finish their operation.

“Sorry to disappoint. I know nothing about rockets. No I’m working in the field of…”

Enemy Lines is a no nonsense war thriller.

With a cracking sound track by Philippe Jakko (Notre Dame) that will keep you glued to the screen as their exploits unfold before you.

Enemy Lines is available on DVD