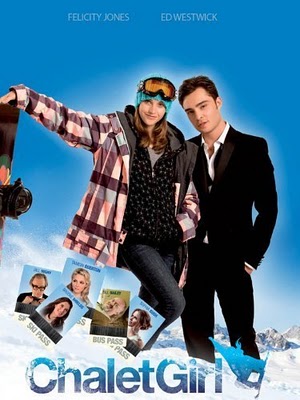 Chalet Girl is a highly enjoyable film and I have given it 4 stars.

This is a British film, written by Tom Williams and directed by Phil Traill (All About Steve) and as such has the delightfully flippant yet somehow still occasionally serious feel that the British capture so well in their films.

The story revolves around Kim Matthews, an ex skateboarding champion, who is forced to give up a promising career to support her father (Bill Bailey) and who eventually gets herself a job in the Alps working at a ski resort. Kim soon discovers that her skateboarding skills transfer to snow boarding and from here the story begins.

The acting in Chalet Girl is excellent all round. It stars Felicity Jones (The Tempest, Northanger Abbey), Ed Westwick ( Children of Men, Gossip Girl), Bill Nighy (Harry Potter, Sean of the Dead) and Tamsin Egerton (St Trinians, The Mists of Avalon).

The film is very entertaining to watch, a chick flick with some extreme sports thrown in for good measure and there is some incredible snow boarding footage in this film. For anyone who is a fan of X games this is ideal and even stars Tara Dakides (snow boarding legend). The romantic comedy side of things is also well handled (if a trifle predictable) and all in all makes for a well rounded experience.

One of the more disappointing things about this DVD and Blu-ray release is the lack of special features included on the disk. There is a commentary track with Phil Traill and Felicity Jones, a theatrical trailer and a 6 minute feature about the film premiere.

However, the film itself is more than enough reason to buy this, and I would thoroughly recommend this one for a girls night in.