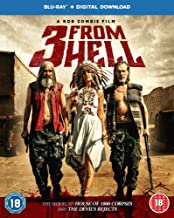 3 From Hell is written and directed by Rob Zombie (Halloween, The Lords of Satan). It is the follow up to The House of a Thousand Corpses (2003) and The Devil’s Rejects (2005).

“I’m just a clown dancing to the sins of mankind.”

Despite the implications at the end of The Devil’s Rejects, Baby Firefly (Sheri Moon Zombie – Halloween II), Otis Firefly (Bill Moseley – Texas Chainsaw Massacre 2) and Captain Spaulding (Sid Haig – Kill Bill; Vol 2, Bone Tomahawk) somehow just about managed to survive the shootout with the police and are set to stand trial for their crimes. 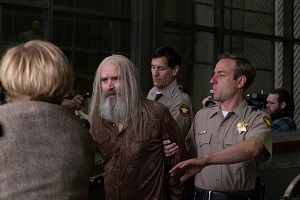 Bizarrely, the trial captures the imagination of the public, with many people protesting that they are innocent and to “Free the Three”. All to no avail however, and Captain Spaulding is sentenced to death by lethal injection, while Baby and Otis are sentenced to life in prison.

True evil cannot be contained however and when Otis is reunited with his half brother Winslow Foxworth “Foxy” Coltrane (Richard Brake – Doom, Game of Thrones) they promptly escape while doing outside prison work. In the process they manage to kill Rondo (Danny Trejo – Machete Kills, Heat), a decision that may come back to haunt them. 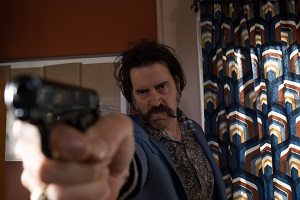 They immediately set about arranging to rescue Baby, whose parole has been denied thanks to increasingly erratic behaviour. To this end they kidnap the family of Warden Virgil Dallas Harper (Jeff Daniel Phillips – Westworld, The Gifted) to make him sneak her out.

With the crazy Firefly family back on the loose, a familiar trail of blood, murder and mayhem ensues. 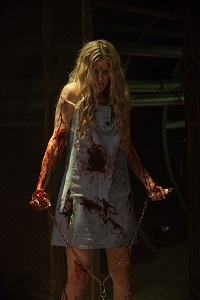 3 From Hell is a very enjoyable film to watch (for those not of a sensitive disposition) and certainly provides more than enough gore and bad behaviour. It is one of the final appearances of the late great Sid Haig and features excellent acting all round. Sheri Moon Zombie is exceptional as the psychopathic Baby.

If there is any complaint it would be that the whole thing seems a little unnecessary. The end of The Devil’s Rejects was thoroughly satisfying and great as it is to see them in action again, in some ways it’s a bit of an anticlimax. Still a great film though and well worth adding to your collection to complete the set.

“Hello America, did you miss me?”

3 From Hell is available to buy now and will be released on DVD and Blu-ray on 14th October 2019.