2 stars for this bizarre and slightly pointless Blu-ray conversion. 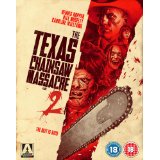 In this second installment, we start out with two young lads driving into Texas, drunk and shooting road signs. For a joke, they call the local radio station, to speak to the rock DJ, Stretch (Caroline Williams – Days Of Thunder, Halloween II). She overhears what appears to be a chainsaw attack, as the lads play chicken with the wrong truck. 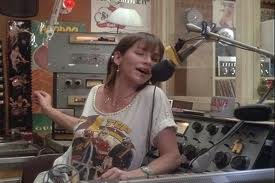 She contacts Lieutenant “Lefty” Enright (Dennis Hopper – Apocalypse Now, Easy Rider), a former Texas Marshall, who happens to be the Uncle of the kids from the first film.  For some reason, even though he is hunting this family, he doesn’t believe her and refuses to listen to the tape she made, which could provide the only evidence he has ever had. Does that make any sense to you? No, me neither.

Upon hearing the broadcast of the tape, the family understandably become interested, thus thrusting Stretch and her trusty side-kick L.G. McPeters (Lou Perry – Poltergeist, Boys Don’y Cry), into a series of terrifying encounters. 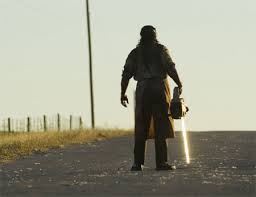 The acting is certainly valiant, with reasonable performances from all involved, especially the cannibals; the Cook (Jim Siedow), Chop-Top (Bill Mosely – The Devil’s Rejects) and Leatherface (Bill Johnson).

It falls down fairly badly on special effects, what there is is fairly well done, but there is not nearly enough of them. It is also nowhere near as gory as I expected it to be, and to be fair, I wasn’t watching it for a clever story-line or sharp script. If it’s going to be a gore fest, don’t apologize for it, get in there. 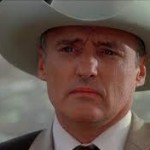 The conversion is not brilliant either, the picture is very grainy and doesn’t seem to have been cleaned up at all and the sound is fine, but not exceptional.

I suppose that the main point of this is the special features, of which there are loads, including – It Runs In The Family, a six part documentary investigating the making of and legacy of the film, and Still Feeling The Buzz (a 30 minute featurette).

There is also a separate disc, including two of Tobe Hooper’s early films, available for the first time to buy. One of them, The Heisters, is a surreal look at three criminals and is mercifully short. The second one, Eggshells, is a feature length film, featuring a houseful of drug addled hippies, with lots of nauseating camera angles, coupled with arty farty shots of leaves and buildings. If these were my early work, I should be keeping them to myself.

Not one to go for unless you are a huge fan of Tobe Hooper and his strange and dated brand of horror.