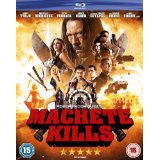 Machete Kills is the sequel to Machete and is written and directed by Robert Rodriguez (Sin City, Once Upon A Time In Mexico).

Machete Kills tells the story of Machete (Danny Trejo – From Dusk Till Dawn, Heat), an ex federal agent who is recruited by the President Of The United States (Charlie Sheen – Two And A Half Men, Hot Shots!) to try and take down a crazy revolutionary, Mad Mendez (Demian Bichir – A Better Life, Che: Part Two). 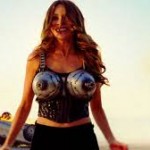 He discovers that he has a device wired to his heart which will trigger a missile and start a war if his heart stops. However, Mendez has put a massive bounty on his own head to ensure that everyone will be out to get him. 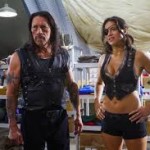 Signs), who is the only one who can diffuse the device, all the while desperately trying to keep Mendez out of the hands of the bounty hunters, the cops and everyone else who would like to see him dead.

As if that weren’t bad enough, Machete is also being hunted by Desdemona (Sofia Vergara – Four Brothers, The Smurfs), the owner of a local brothel who has some very interesting weaponry, and ruthless assassin, the Chameleon, brilliantly portrayed by Lady Gaga (and also Cuba Gooding Jr., Walton Goggins and Antonio Banderas). 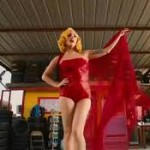 Quite a ridiculous cast and as you would expect the acting is excellent. Machete Kills really does look as if it was very good fun to make. There is wall to wall action, with plenty of comedy and lots and lots of guns, blood and of course, Machetes.

The film opens with a trailer for the sequel, Machete Kills Again: In Space, which looks if anything even better than this one. I sincerely hope they actually make it. Will definitely be getting the first one, this is a must see for fans of this kind of action packed, high octane shoot-em up.

You can’t surprise pussy-punch someone.

Machete Kills is available to buy on DVD and Blu-ray from 17th Feb 2014.

There is also a Limited Edition Steelbook available exclusively from Zavvi, which features artwork done by a fan (Thomas Walker) who won a competition run by Empire Magazine.