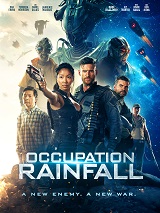 Occupation Rainfall is an Australian Sci-fi film, the sequel to the 2018 film Occupation. With several of the actors reprising their roles from the original film, this sequel boasts a considerably better budget and special effects from the team behind The Last Jedi.

It is written and directed by Luke Sparke (Red Billabong).

It is two years since the events of the first film, when an alien mothership appeared out of nowhere and sent unmanned drones to destroy all the cities of Earth. Since them, the greys have launched a ground invasion, intent on wiping out what remains of humanity. 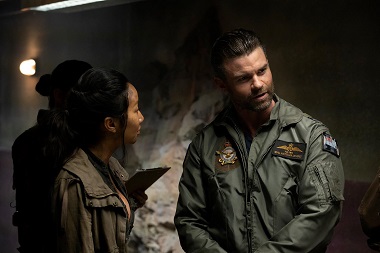 There is a human resistance, but they are barely hanging on. Our story takes place in Sydney, where the humans are slowly being forced out. There is however a small amount of hope in the form of Amelia (Jet Tranter – Thor: Ragnarok) and Abraham (David Roberts – Ghost Rider, Total Control), who are working on an alliance with some of the greys who want the war to end as much as the humans do. 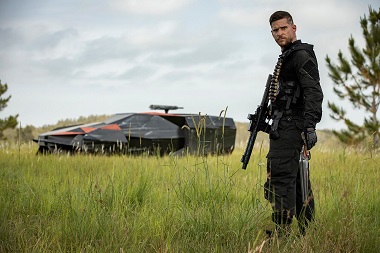 Their intelligence have heard rumours concerning “Rainfall” , a code name for an American base Pine Gap, within the Sydney area. It seems important, however Wing Commander Hayes (Daniel Gillies – The Originals, The Vampire Diaries) has made the contentious decision to pull out of the area to avoid further losses.

It is deemed essential that someone investigates so while the resistance forces evacuate, two volunteers, Simmons (Dan Ewing – Home and Away) and Garry the Alien (Lawrence Makoare – The Lord of the Rings Trilogy) set off to Pine Gap to find out what is going on. On the way they pick up old friend Peter Bartlett (Temuera Morrison – Star Wars, The Mandalorian) and face numerous battles with aliens of all shapes and sizes. 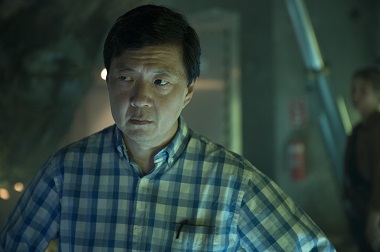 On arrival they are met by the hilarious Bud Miller (Ken Jeong – The Hangover) and his film obsessed friend Steve the Alien. Do they hold the secret of Rainfall?

Occupation Rainfall is a very entertaining film. There are some truly mind boggling action sequences and the CGI is very good indeed. There is an awful lot going on, so much in fact that sometimes it gets a little muddled as to who is doing what and why. 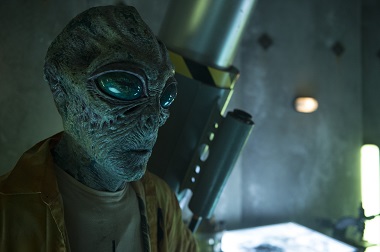 There are some excellently alien looking vessels, and some aliens which are nothing like anything I’ve seen before. The script is okay, if a little rushed and the acting isn’t bad either. The film feels like it wants to take itself seriously and yet can’t resist some very amusing comedy scenes.

You don’t really need to have seen the first film in order to enjoy this one. You will however really want to watch the third one (which currently doesn’t exist) after watching it, so here’s hoping they finish off this fun story.

“I don’t want bloodshed, but if it’s me you want, come get some. Come and try.”