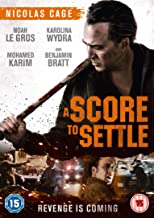 An Hallucinating Ex-Con With a Grudge.

With an illustrious career you would think that decisions on scripts would come easily for a Hollywood star, but not this time. A Score to Settle is like wading through a quagmire and the only thing about it is Cage. Director Shawn Ku (Beautiful Boy) takes John Stuart Newman‘s story about an ex-enforcer who has done time for his old boss. It does seem like Cage likes to take on people with little experience before he makes a movie, these are major mistakes.

Frank (Nicholas Cage, Tokarev, Pay The Ghost, The Trust, Season of the Witch, Con Air) sits in the prison infirmary, where he is told that his persistent insomnia will lead to complications like dementia, hallucinations and death hence his early release.

We get a flash back of the events that brought him to this point. He is with his boss, teaching him the finer points of baseball (insert victim here). When the ball goes missing a young Frank (Bailey Coppola, Sacred Blood) and the young Q (Alex Alegria) go to find it and when they return, their boss Max (Dave Kenneth MacKinnon, Hollow in the Land) has got carried away with the bat and the victim. This is why Frank went to prison, for his boss, a big payout and the promise to look after his young family.

For some reason they release him in the middle of

the night (just to point out his lack of sleep, perhaps). With no one around he heads down the empty road on foot, until he spots someone walking towards him. It turns out to be estranged son Joey (Noah Le Gros, Depraved) who is now in his early twenties and he has daddy issues and a chip on his shoulder.

there is something there waiting for him, lots of money and the offending baseball bat (why the bat). Now flush he wants to make up for lost time with his son and treats the pair of them to a lavish hotel, car, suits and watches.

But Frank doesn’t sleep and he has to find something to do and that is find guns and the old crew Q (Benjamin Bratt, Doctor Strange), Tank (Ian Tracey, Civic Duty) and Jimmy (Mohamed Karim, A Facebook Romance)  that betrayed his trust and broke the promises they made. Will meeting the beautiful Simone (Karolina Wydra, Incarnate) change his agenda?

A Score to Settle is one for true Cage fans and yes there is a twist with twenty minutes to go.

A Score to Settle is available on DVD.