3 stars for this glossy and highly produced horror film. 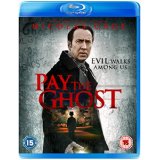 Released just in time for Halloween, Pay The Ghost is based on the novella by Tim Lebbon, written by Dan Kaye (Timber Falls) and directed by Uli Edel (Houdini, The Baader Meinhof Complex). 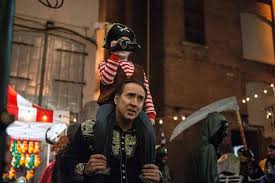 This year, he has broken yet another promise to take his son trick or treating. To make up for it, even though he is late, Kristen reluctantly agrees to let Mike take Charlie to the Halloween Fair. However, this may prove to be a very bad idea. Charlie has been seeing some strange things recently and while standing holding hands, he asks Mike, “Daddy, can we pay the ghost?” and then he disappears. 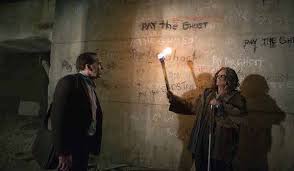 A year on and the police investigation, headed up by Jordan (Lyriq Bent – Saw II, III and IV) is no closer to solving the mystery of what happened to Charlie. Mike has started to see him all over the place, looking exactly as he did on the night he disappeared and when he follows him, finds himself in a homeless camp, where he finds a wall with “pay the ghost” written all over it. He suspects supernatural activity.

Although their marriage is no more as Kristen blames Mike for losing their son, they decide to join forces and hire a psychic (Susannah Hoffmann – Wilby Wonderful) and that goes about as well as you would expect. Will they solve the mystery and find their son and all the other children who have gone missing on Halloween? 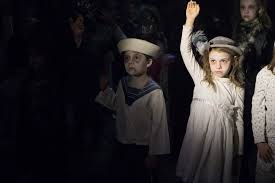 Pay The Ghost is quite an enjoyable film to watch. It doesn’t have the raw feel necessary for real horror, but there are certainly plenty of jump scares and the concept, although not very original (think Poltergeist meets Insidious) is actually quite disturbing.

The performances are all fine too although some of the characters are extremely annoying and the police seem a bit rubbish at cross referencing their information.

Not the best Nicholas Cage film by any stretch of the imagination, but as a fun mid-range horror for Halloween this is spot on. 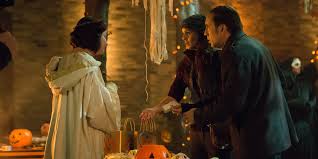 Pay The Ghost is available on DVD, Blu-ray and download now.