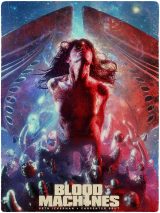 Adventures in the Black.

Shudder.com brings us a Shudder original from the vision of Seth Ickerman and synthwave artist Carpenter Brut (Turbo Killer (2016)). With Ickerman taking on many of the behind the scenes roles, i.e director, writer, visual effects, editor, production design, he brings us a 1980’s psychedelic Sci-fi oddity (Nothing like Major Tom’s experiences).

Deep, deep space and Vascan (Anders Heinrichsen, Valerian and the City of a Thousand Planets) and his mechanic Lago (Christian Erickson, Hitman) have brought a contaminated ship. They are

“Blade runners” and seek out ships that have been taken over by their A.I.’s (Artificial Intelligence) and this time they have shot down a scavenger ship which crash lands on the planet Apus 7.

Vascan follows down planet-side where he discovers the crew of the downed ship are females led by the tough Corey (Elisa Lasowski, Versailles (TV Series)) who soon has her crew Bulk (Marion Levavasseur, The Hunger Games: Mockingjay – Part 1 (stunts: Paris)) and Bald (Natasha Cashman, Maryline) scavenging from

Vascan’s ship. Corey tells Vascan that her ship lives and can be saved, but Vascan is a hardened veteran blade runner and he knows that her ship has a corrupted A.I. and it needs putting down. Vascan uses machines in various nasty ways.

Corey and her crew must be quick and perform a ritual for their dying ship. Corey mounts her ship as Bald starts the ritual and what Vascan and Largo witness is hard to be believed and it is the start of their psychedelic 80’s synth adventure.

Blood Machines is available on Shudder.com