1: Where did the idea for Express Delivery come from and how long has it taken to get to this point? 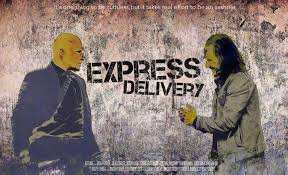 It all began with Sonny Louis who approached me to co-design and action direct a fight scene so he could show a stunt coordinator that had asked for it.
At first I suggested another action actor friend of ours to allow me to focus on
shooting and directing but Sonny was adamant that I had to play the other
part. Knowing the dedication, time and energy it takes to act whilst performing action, and direct both our performances and the cinematographer I said I
could only commit if we went all out and did it properly as a short film.
Sonny of course agreed so I wrote the synopsis for 2 films, one of which was
Express. I had an idea for a bigger project and Express was originally going to
be the pilot for a series, but after post-production, I felt the idea worked better
as a feature with the potential of a series later on.
My father and I brought on Ki Films, and Sonny was exec producer. Financially we went halves all the way. It’s been a real team effort, and I couldn’t be happier with everyone’s incredible dedication and passion to and for the project. In particular, special shout out to our amazing DoP Rob Beck and our sound editor Dean Covill who both went above and beyond.
From conception of the short to now, Express has taken approximately two
years.

2: KI Films, how are you involved with them and where do you see them going in the near future?
I co-founded Ki Films with my father but it’s gone through many changes
from its original conception. After I’d made about twenty short films
(that no one will ever see) and started to do more freelance work predominantly 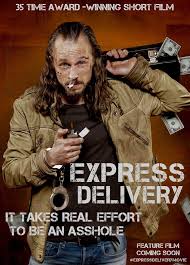 as a videographer, I set myself up as a sole trader under the name Ki Films. I always had this goal to eventually own an established production company that produced high-end genre feature films with strong themes and messages, and this was where I started.
I played around with several names until I finally thought of ‘Ki’ that translates as spirit in Japanese.
I felt this was fitting as I believe we are spiritual beings on a human journey, and it is our spirit and attitude that defines us in life and of course on set.
After a couple high-end music videos, I teamed up with a good friend of mine
and made ‘Ki’ an LLP. We continued making promos and took a big step into
developing our first feature film that at the time was ‘Sticks & Stones’. After
several years of swimming against the tide we eventually went our separate
ways and I shelved the film in order to return to it when the time is right.
Continuing to write, direct and produce music promos and shorts I eventually
teamed up with my father who’s an incredible photographer. We had already
shot promos for Universal and Warner Music, working with artists such as
Agnetha Fältskog (ABBA) and Chinese superstar Karen Mokso bringing him
onto Ki made a lot of sense. We made Ki a limited company and soon after
shot the music promo for Helen Jane Long’s ‘When Angels Rise’ that won 6
awards internationally, followed by ‘Express Delivery’ that has most recently
won its 40th award!

Ki currently has a slate features and a series in various stages of development, and we continue to produce Music Promos and Commercials.

3: Express Delivery is heavy on the Martial Arts, how long did the fight sequence take to complete?

Time was limited as outside of additional projects, we were busy on other
aspects of ‘Express’ such as finalizing script, storyboarding and general
preproduction. Due to this we spent less time in the sessions, about 2 hours
or so. To make up for this we met about 3 times a week. I can’t remember the
exact time but I reckon we had the choreography down in aprox 5 weeks and
then we spent two full days pre-vizing it.

4: Tell us more about the cast of Express delivery?

Sonny incentivized the entire project. As a stunt performer transitioning into acting he had a strong motive to get things going which I’m incredibly thankful
for. He was insistent that I both act and direct, something I have done many
times in the past but hadn’t taken on for a few years so that was the main cast
sorted. Haha. Regarding the rest of the cast, due to limited funds, we didn’t go through a casting director.
Instead, we put a call out on Facebook through our Ki Films page, and of course we messaged the usual suspects.
As it was a joint venture, produced by Wolf, Sonny and Simon, we asked
every actor who was interested or who we already felt would be right, to self tape.
We each ha 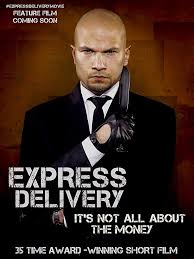 d various ideas of cast, and fortunately as we get to work with a lot of talented actors, it wasn’t hard to get some great tapes.
Sam Benjamin had worked with Sonny, and I had worked with Rachael Holoway. Interestingly Rachel and Sam had also worked together a couple of times, and we felt that them already having chemistry would work well on
screen. Originally there was only two Collectors in the script, but Sonny and myself really wanted to involve Leon Sua who also coordinated the action. We had met and worked with Leon on Batman Begins in 2003 and whilst we have
worked with him many times since it had been several years since the last project so it was great to get the old gang back together.

5: You have announced the feature of Express Delivery, how is the project going and when do you expect filming to start? 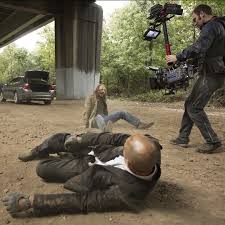 Currently we are in talks with companies and investors. Everything is ready to
go once the money is on the table, until then I can’t really say.
What I can say is the positive feedback and interest we have got throughout
the entire journey from the short to the feature screenplay,
and the project in general has been insanely positive, and we’re all incredible excited to take this into production.

6: What has the future got in store for Beau Fowler and KI Films?
I’ve predominantly been acting having recently done several films back to
back.
I got to do a quirky improve scene with an A-Lister in a big studio movie
that was a lot of fun and recently wrapped on Avengement working with Scott
Adkins and Nick Moran which was great fun.
Right now of auditions, I’m prepping Express, predominantly storyboarding that is a mammoth task!
Additionally for Ki Films and myself, we have several feature films in early
stages of development as well as a sci-fi series that I’m truly excited about. As
we continue to develop these we are still producing narratively driven music
promos and commercials.

Thank You Beau for taking the time out of your busy schedule to answer our questions, all the best for ‘Express Delivery’ and the future. RRR