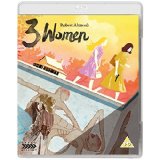 5 Star Look into the Psyche.

In my opinion this is probably Robert Altman‘s (The Long Goodbye, Nashville) finest work, as he wrote, produced and directed this masterpiece of the human mind and how it interacts with the others it meets.

3 Women is sometimes a surreal art film with strange shots only known to the writer/director and other times a masterpiece of how attraction works and how people deal with their own psyche and how they themselves to the outside world. I pretty sure that we have all met people like Pinky (Sissy Spacek, Carrie) and Millie (Shelley Duvall, The Shining). But just be glad that you don’t meet both at the same time. 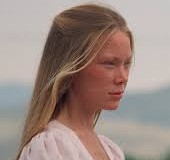 Pinky has moved from Texas to California and has just arrived at her new job at the Desert Springs Rehabilitation and Geriatrics Center. Here she stands fixated, looking through a glass divide as aides take the clients on a walk through the healing waters of the centre. She is distracted and taken by Ms. Bunwell (Sierra Pecheur, Kalifornia) through to the other 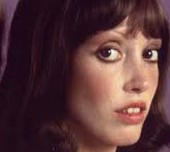 side of the glass where she is introduced to Millie whilst she goes about her duties. Millie is put in charge of Pinky as she is to find her a costume and show her the ropes.

We soon find out the childish side of Pinky as she plays with her food and doesn’t take the world to seriously. Millie on the other hand is a blabbermouth that no one pays any heed,

not even the weird aloof twins Polly and Peggy (Leslie and Patricia, Ann Hudson). Whilst Millie doesn’t take much notice of others (as she is always speaking) she shows Pinky how to do her jobs around the center including the bath house where it seems that Pinky has a strange creepy fascination for our Millie, even to the point of spying on her and cataloguing what she says.

Just watching this pair on screen is mesmerising as Altman pulls the best out of these young actresses Sissy off the back of her hit Carrie and Duvall from Nashville.

fact that nobody actually interacts with her, other than Pinky, whose obsession only increases when she gets the opportunity to move in with her as a ‘roomy’ from her flea-bitten single room to the glamorous abode of Millie’s.

Pinky also has a fascination for the part owner of the Dodge City bar out in the desert, Willie (Janice Rule, Missing), an artist of swimming pools, where she paints surreal characters on the walls and bottom for all to see.

It is not until things go wrong for our duo that things really take a turn (no spoilers), then you see the amazing talents of these two. With a good support from the talents of Robert Fortier (The Girl Rush).

So sit forward and pay attention, you are in for a masterclass of acting ability.

·         Optional English subtitles for the deaf and hard of hearing

·         New video interview with David Thompson, editor of ‘Altman on Altman’ and producer of the BBC’s ‘Robert Altman in England’

·         Archive interview with Shelley Duvall from the Cannes Film Festival – the actress describes working with Altman, his methods and how she started acting

·         Booklet featuring new writing on the film by critic David Jenkins and excerpts from Altman on Altman, illustrated with original stills