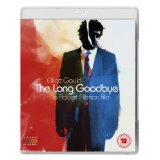 The Long goodbye is presented in full 1080p but still has the feel of an early 70’s film. Robert Altman, (Mash, Gosford Park) takes Raymond Chandler’s book of the same name, lifts it from the 40-50s and drops it into the seedy 70s, just 6 years after the summer of love.

Private eye Philip Marlowe, (Elliot Gould, Oceans Eleven, Mash) has three things in his life, his cat, his cigarettes and the ability to sniff out trouble.

A scratched and bruised knuckled Terry Lennox, (Jim Bouton, How Do You Know) turns up at Marlowe’s pad in the hills and asks for a favour. Marlowe thinks it’s a big favour but as they have been friends for a long time so he agrees.

The favour is a drive out to Tijuana because he has fallen out with his wife and he’s pissed some people off.

The wise cracking Marlowe soon finds himself on 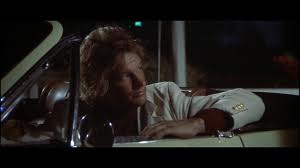 the wrong side of the law as he spends three days being questioned about the death of Lennox’s wife and the location of Terry. Until he is suddenly set free, as Terry has been found dead after committing suicide.

He doesn’t believe that his friend would do either thing and vows to clear his name of the heinous crime, whilst at the same time he gets a job to find a missing washed up writer, Roger Wade, (Sterling Hayden, The Godfather) by his battered wife Eilleen Wade, (Nina Van Pallandt, American Gigolo).

It doesn’t take Marlowe to track down Mr Wade and reunite him with his wife and they form an uneasy friendship.

At this point things get worse for Marlowe as the hood Marty Augustine, (Mark Rydell, On Golden Pond) tells him that Terry was supposed to deliver $355,000 to Mexico and it didn’t arrive, and he knows Marlowe’s connection to the deceased. He charges him to find and return the cash.

Will the sleuth find his quarry and will he solve the mystery over the death of his friends wife?

You will spend time pausing this film as you go “is that?” – yes it most probably is. Rewind the film, as some famous faces go uncredited, such as David Carradine, (The Long Riders), George Wyner, (SpaceBalls) and Arnold Schwarzenegger, (True Lies).

A great film and now looking even better on Blu-ray and with a load of Special Features to make a great addition to your collection of classic films.