4 stars for this well made tale of swords and sorcery. 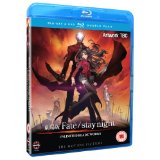 Fate/Stay Night: Unlimited Blade Works is directed by Yuji Yamaguchi and is based upon and features the characters from the TV series of the same name.

This film finds us firmly in the middle of the war for the Holy Grail ( a powerful artefact, able to grant any wish to it’s owner), a war in which the seven Mages compete against each other in a fight to the death. 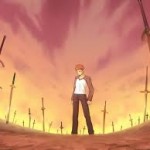 To assist them in their endeavours they can each summon a powerful ally in the form of any one of seven hero classes, Saber, Archer, Rider, Berserker, Lancer, Caster and Assassin.

Our hero Shirou is unskilled as a mage, but is finally forced into the fray when he becomes embroiled in a battle between Archer and Lancer. With his Servant Saber, he joins forces with his schoolmate and fellow Magus, Rin Tohsaka and her Servant Archer. 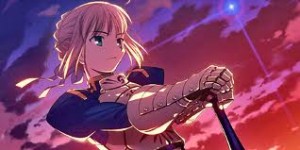 With the odds pitted against them Shirou must dig deep and learn the secrets of the Unlimited Blade Works.

The animation in Fate/Stay Night: Unlimited Blade Works is very nice indeed, lovely colours and interesting use of light and shade to add atmosphere. It also features plenty of action sequences and intricate combat scenes, which are great and add to the excitement of the whole thing (The flying sword attack from Gilgamesh is quite something to behold).

This is a great idea for a story and really well written. If you haven’t already seen the TV series don’t worry, you don’t need to, the character development is good enough that you can soon pick up who is who.  If you have though, there is plenty here for you that is new (including the identity of Archer, which was not revealed in the original series).

This is definitely worth adding to your collection, one to watch again and again. 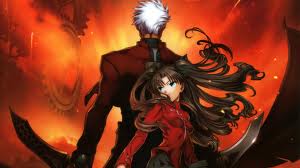