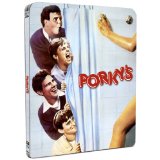 Originally released in 1982, Porky’s is written and directed by Bob Clarke (A Christmas Story, Baby Geniuses), a cult classic which was arguably the fore-runner of films like American Pie and The Hangover.

Set in 1954, Porky’s tells the story of a group of college students, intent on helping their unfortunate friend Pee Wee (Dan Monahan – The Night Flier, Baby Geniuses) who is trying desperately to get himself laid. 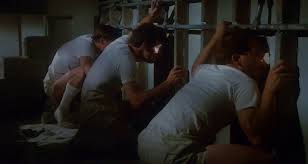 Pee Wee and his friends are engaged in an ongoing battle with their teachers, coaches, other students on campus and the world in general. One of their favourite pastimes is to hide behind the shower heads in the wall of the ladies locker room, so that they can can watch the action.

Of course, they eventually get caught, when Balbricker (Nancy Parsons – Sudden Impact, Steel Magnolias) the ladies sports coach, manages to capture Tommy (Wyatt Knight – Porky’s II, The Next Day) by the “tally-whacker”, 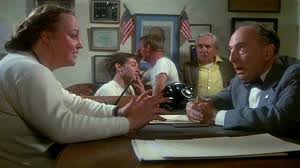 leading to one of the funniest scenes I have ever seen as she tries to explain to the head master, with the other two male coaches laughing their socks off in the background.

Along side all of this are the constant attempts by Coach Brackett (Boyd Gaines – Fame, Funny Games) to find out why everybody refers to ladies coach Honeywell (Kim Cattrall – Sex and The City, Big Trouble In Little China) as “Lassie”.

Eventually the boys efforts lead them to Porky’s, a decidedly dodgy strip joint come whorehouse just across the county line, where they have a run in with the rotund owner Porky and his redneck brother, the Sheriff, who take against the boys from Angel Beach. All manner of hilarity ensues as the boys go out for revenge.

Porky’s is altogether worth a watch, extremely funny and risque from start to finish, with enough full frontal nudity to satisfy almost anyone, and some real laugh out loud moments. How on earth Coach Warren (Doug McGrath – Ghosts Of Mars) survived the amount of laughing he had to do during the filming is totally beyond me, but it is highly contagious.

This is a must own  conversion of this eighties classic, with new special features, made specially for the UK Blu-ray release. Excellent!

Porky’s is available to buy now on Blu-ray and Blu-ray Steelbook.