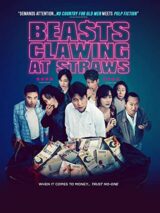 Taken from the novel of the same name by Keisuke Sone (Original Title, Beasts That Cling to the Straw), and directed by Yong-hoon Kim on his directorial debut, he also wrote the screenplay for this twisty tale of money and fate, and it is always the poor at the bottom, crave for more of what they deserve. And how those that have much want more.

When you strike it rich, you can’t trust anyone.

lockers. Cleaner Mr Kim Joong-man (Sung-Woo Bae, You Call It Passion, My Love, My Bride) is doing his job, and it has just gone 06:13, so the place has closed up for the night. One of his jobs is to check the lockers for lost property. In #47 he is in for a shock, it’s that bag from earlier, and it is packed full of cash. He squirrels away the bag in the storage area for future collection. At home things are not so good as his luck at work, he looks after his elderly mother and his wife, and they have had to take out a loan to help their daughter with her college tuition fees.

Meanwhile, somewhere else in the Pyeongtae Lake area, customs worker Kan Tae-young (Jung Woo-sung, The Good the Bad the Weird, Asura: The City of Madness) is in Mr Park Doo-man’s (Man-sik Jeong, A Hard Day, The Yellow Sea) bad books, as he hasn’t paid off his loan, and he is summoned to his fish market business to explain himself. Mr Park makes it plain that if he hasn’t paid it in a week he will endure the sharp knifes of fish filleter Dood (Dae-han Kim, Space Sweepers, The Celebrated Gisaeng). Tae-young blames his girlfriend Yeon-hee (Jeon Do-yeon, The Housemaid, Secret Sunshine) for running off with the loan money.

Mi-ran (Hyun Been Shin, Seven Years of Night, Confidential Assignment) works as a hostess at a bar where she meets fussy client Jin-tae (Ga-ram Jung, Believer, The Poet and the Boy) who likes her, so she stays and entertains him. She gets an advance on her wages and heads home and falls asleep on the couch, until her husband comes home drunk and beats her for not helping to pay off their debts. This doesn’t get missed by Jin-tae or her boss the next time they are at the bar, this problem can be sorted.

I realized how scary getting used to something is.

Those are the main players, throw in Tae-young’s childhood friend Carp (Ji-hwan Park, Unstoppable, The Outlaws) and a wierd cop Myung-goo (Je-mun Yun, Okja, Boomerang Family) from his old school, and you have the makings of a very strange tale.

Beasts Clawing at Straws is like a twisted game of shells, in this dark and violent story of you never know who you are mixed up with, Nail Biting Stuff.

Beasts Clawing at Straws is available on Digital and Amazon Prime