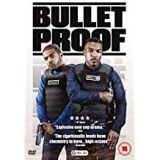 Bad Boys for the Brits.

Noel Clarke (Saving Santa 3D, Saving Santa, I Kill Giants) comes back to TV with a bang in this new buddy cop show. Created by Noel, Ashley Walters (Montana, Doctor Who), Nick Love (The Sweeney, The Football Factory) and starring Noel this show is unlike other modern buddy cop shows, as it is set in the heart of London UK. This show is all in with no round edges, so sit back and prepare yourself for one heck of a ride around the seedy streets to the very heart of the capital city of England.

Aaron Bishop (Bish) (Clarke) and Ronnie Pike (Walters) work for the NCA and they have been called by their informant Sabine (Andrea Tivadar, One Fine Day) about a gang that steals high end cars and exports them to Eastern Europe. She is scared and wants protection, but the boys can’t just pull that out of the bag so she walks. The next second she is run down by a speeding car that comes skidding to a halt then reverses over the prone body.

The action starts now as the duo give chase, there is a lot of high speed danger as they speed through tunnels and dodge oncoming traffic. Bish hates the driving that Pike loves and this is the first time you get to see the banter between these two who are closer than blood brothers. The quarry manages to evade capture but it gives the pair a lead to a warehouse where they set up surveillance with the other members of their team

Jonesy (David Elliot, The Wee Man) and Nell (Christina Chong, 24: Live Another Day) run by their leader Sarah Tanner (Lindsey Coulson, EastEnders) who has a fondness for the pair of lads.

Pike is a married man to Arjana (Lashana Lynch, Fast Girls) and has two girls both growing up fast whereas Bish is in a relationship with Sophie (Emma Rigby, Girl on a Bicycle) whom he doesn’t trust and this plays on his mind alot.

The person at the top of the NCA is Ronald Pike Snr  (Clarke Peters, John

Wick), Ronnie’s father and he likes to keep an eye on what his son is up to. When the team are ready to spring the trap on the car smugglers things goes wrong in that Nell and Jonesy are kidnapped by the gang and the team have to leap into action and stop the cars being loaded into the containers at the docks.

The rest of the series is an on going story as a wanted criminal Michael Sharp (Doug Allen, Band of Brothers) turns up unexpectedly and the customs alert the NCA. Known for bank robberies, he is followed by Bish and Pike to a safety deposit repository and when the explosions kick off the pair have a job on their hands as bodies of the robbers start turning up dead and Sharp goes to ground. With a story of intrigue and danger the pair must discover the link between the stolen saftey deposit box and why thieves are dropping dead.

The Bulletproof premise has been done before, but this is a great take on it and a great job done by Clark, Walters and Love. Looking forward to a second season. 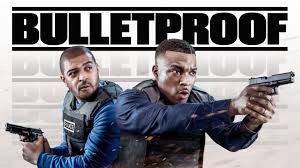 Bulletproof is available on DVD.