3 stars for this festive animation for young viewers. 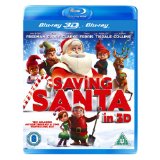 Saving Santa is set in a future where the demands on Santa (Tim Conway – SpongeBob SquarePants) have increased and he has been forced to employ technology in order to ensure that he can reach everyone in one night.

Santa has a crack team of elves, whose job it is to invent the necessary items to assist him. He is now the proud owner of a hologram which disguises the location of the North Pole and a sleigh which still uses his flying reindeer, but can now time travel. 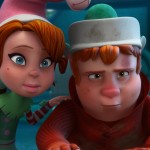 This is the tale of Bernard D. Elf (Martin Freeman – The Hobbit: An Unexpected Journey), a stable elf who wants nothing more than to become one of Santa’s inventors. His memory machine seems to be just the thing, until it malfunctions, causing the hologram to fail, revealing the location of the North Pole to Neville Baddington (Tim Curry – The Wild Thornberrys, Star Wars: The Clone Wars), a delivery company owner determined to discover the secret of Santa’s success and take over from him.  It is up to Bernard to use his knowledge of time travel in order to undo his mistake and save Christmas. 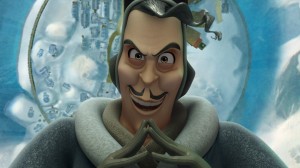 The film also stars Noel Clarke (Doctor Who, Star Trek Into Darkness), Ashley Tisdale (High School Musical, Donnie Darko) and Joan Collins (Dynasty) and the voice acting in this production is, as you might expect, pretty good, but is let down a little by an uninspiring script.

The tendency of the characters to randomly burst into Disneyesque song and dance routines in order to explain what should be an obvious moral is quite irritating and unfortunately the songs aren’t really catchy enough to justify their presence. 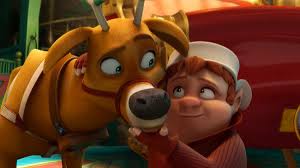 The animation style is nice, simple but colourful and effective, for a film which is obviously aimed at young children. The 3D element does enhance everything somewhat, although it is quite basic it seems pitched at about the right sort of level.

What doesn’t seem quite so suitable however is some of the content. I’m unsure whether children would connect with an evil delivery man, or know much about corporate matters and there is some question as to whether they would really get the song lyrics.

But maybe none of that really matters. This would still be a good film to sit and watch as a family and contains plenty of healthy messages about the value of friendship and loyalty, which kids will probably love. 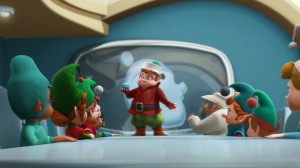