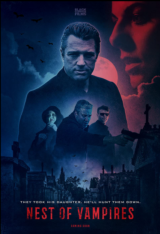 British Independent writer, producer, and director Chris Sanders (The Curse of La Quintrala (Short)) brings us his full- length feature horror, wiith a tale of human trafficking and the wrong person crossed. This is Kit Valentine’s (Tom Fairfoot, The Journey Is the Destination, Our Girl (TV Series)) story.

Lapis Lazuli, a deep blue mystical stone. The Ancients believed that the spirits of their Gods lived within the stone. Enchanted by witches, Lapis Lazuli enables vampires to walk openly in sunlight.

They walk among us.

The shady character Mario DeNardo (Jon-Paul Gates, The Color of Your Skin, Borstal) stalks the streets looking for his prey. Today he has a

specific target, and that target is the Valentine’s residence. At home is mother Marsha Valentine (Lucy Marshall, Cured) and more importantly her daughter Anna (Daria Krauzo, The Whole Point of It (TV Mini-Series)), who is the subject of Mario’s business today. And after he puts Marsha through a thorough breath loss program he sees to his main business.

Now two months later, Marsha has been buried and Anna’s father Kit is on the hunt for the people traffickers that swiped Anna. He has his friend Edward (Frank Jakeman,

The Rise of the Krays) to help him to get money, so that he can go off grid to find his daughter. Armed with his money, photographs and the name of a rural town where he may find the international criminal Samuel Archer (Hans Hernke, Hidden Agenda, Red Army Hooligans, The Howling (2017), Another Plan From Outer Space) who has connections with the FBI, and his very cool, calm and collected daughter Anna.

Get the first train back to London… A cover story is already in place.

Our MI5 agent finds himself boarding at an Italian restaurant come Hotel, where he has all the photos of the guilty and his trusty sidearm.

You’re all going to die.

Archer may be Kit’s target, but it is Margaret (Rosanne Priest, When It Rains (TV Mini-Series)) that keeps him organised and the flow of women through their books and their rich clients bedrooms.

With rich clients waiting in the wings for their new show-off pieces, Anna is still confident that her father will save the day, and they will all die at his hand. Meanwhile he is making new acquaintances, Simone (Jet Jandreau, The Purple Orchid) in his search for those that killed his wife and kidnapped his daughter. Even a warning from a fellow MI agent doesn’t put Kit off the trail. He is out for blood.

Nest of Vampires is a novel look at the Vampire horror scenario, but it is also a breath of fresh air, and it is great to see that British Independent film making is going strong, and a first-rate first feature film and we at RRR look forward to seeing more from Mr Sanders.

Everybody wants you Dead!

Nest of Vampires is now available on Rent or Buy

and now on Amazon Prime