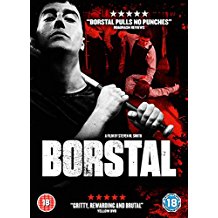 From Greenway Entertainment (Essex Boys: Law of Survival) and director Steven M. Smith (I Am Hooligan) comes the film that follows the true story of Kris Gray and is based on his novel ‘Two’s Up’. In 1971, after a petty conviction, he is sent to a brutal Borstal for boys and must deal with beatings, racism, discrimination, nasty screws and cows!

Borstal starts with a young man being lead from court to a waiting Ford Transit van, to be taken to a borstal for a stretch that can last up to two years. The young man is Kris Gray (Matthew Winters, Humans) and he comments about how he is off to borstal and doesn’t know what he is in for.

It’s the 3rd of February 1971 and Mr Gray is met by Jim Hunt (Kevin Horsham, Olive Green), who asks Kris about himself and he tells him that he is a musician and that he is always going to be. He doesn’t want to be trained to be a bricky or a motor mechanic or any of the other City in Guilds courses

that the Borstal has to offer. Kris has a long term girlfriend Moira (Maria Austin, Mercy) and he is told that all correspondence must go through the proper censorship channels.

After a meeting with Governor Heywood (Patrick Kilpatrick, Last Man Standing) he expresses his wish to work with the animals on the borstals property. He 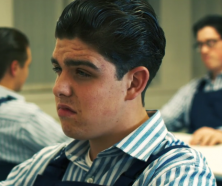 is then teamed up with his sponsor Alan Welch (Sonny Denham) who explains to him about ‘Two’s Up’ and sharing everything and welcomes him to their dorm ‘Jupiter One’.

He gets his wish and is allowed to go and work on the farm where he meets the farmer Paddy Gibbons (Tony Fadil, Invasion Earth)

and JJ is number 2 and JJ takes an instant dislike to Kris as they have never had a need for a number 3. JJ feels threatened by his appearance and his better than you attitude (which he isn’t he just wants to keep his nose clean and do his time in the shortest time possible).

The head of keeping all the inmates in order is Len Forshaw (Jon-Paul Gates, Ghosts) a man from the North who has run some of the toughest prisons in the country and he doesn’t take to Kris either. But Kris takes a liking to his wife Sally (Tiffany-Ellen Robinson, Taghoot) when they come across each other. She knows of his

musical reputation and want to see him play.

He goes from shovelling manure to catching escaped cows, dodging arguments and fists to playing his guitar. It’s knowing who are your dorm mates and who to avoid as the beatings are dished out freely in Borstal. A great release from Greenway Entertainment and with a soundtrack from the real Kris Gray you are in for a cracking throw back too 1971.