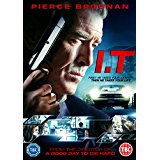 I.T. is written by Dan Kay (Pay The Ghost, Timber Falls) and William Wisher Jr. (Judge Dredd, Terminator 2: Judgement Day) and directed by John Moore (The Omen, Behind Enemy Lines). Given this pedigree, the Swiss cheese nature of certain major plot elements is something of a surprise. 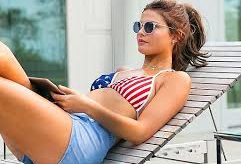 Mike Regan (Pierce Brosnan – GoldenEye, The Lawnmower Man) is a self made businessman, involved in the aerospace industry, who has become very rich and lives in a state of the art “smart” house, where everything is controlled by a complex system connected to the WiFi. He shares this home with his beautiful wife Rose (Anna Friel – Limitless, Pushing Daisies) and lovely 17 year old daughter Kaitlyn (Stefanie Scott – Insidious: Chapter 3). 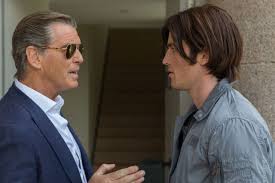 Mike and his company have come up with a new app which is set to send their profits soaring. The idea is to rent private jets using an Uber style app, for people with more money than sense. However, during a vital presentation they undergo a system failure. Luckily for them, temporary I.T. consultant Ed Porter (James Frecheville – The Drop, Adore) is there to save the day and Mike immediately hires him. 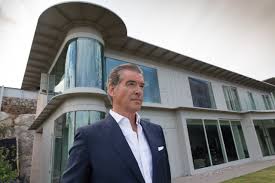 Suspicious of technology but not apparently people, he invites Ed into his home to investigate his WiFi and try to speed it up for him. Things take a sinister turn when Ed befriends Kaitlyn on social media and tries to gatecrash a party and soon he is forced to fire him. This is when he discovers that living in a house completely controlled by technology and then annoying a hacker to whom you have given your WiFi password is a bad idea.

The concept of someone being able to hack into your home and observe you and even interact with every aspect of your life is undeniably scary. The acting is as good as you would expect from the cast and Pierce Brosnan carries it well, but there is a lack of attention to detail and a little more research around the subject wouldn’t have gone amiss. 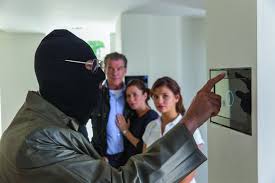 It is quite irritating when Henrik (Michael Nyqvist – John Wick, The Girl With Dragon Tattoo) comes to remove the technology and not only do they leave the panel in the main room dangling from the wall, it’s still active! Seriously? Also, when they pull the wires from the wall, they’re installed diagonally up the wall. Who does that?! Not a bad film but let down by too many annoying little details.

I.T. is available to buy now on DVD.