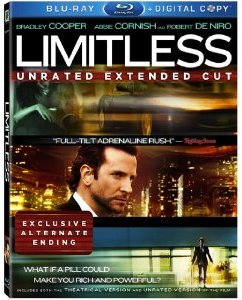 This is an excellent film, 4.5 stars.

Limitless follows the exploits of aspiring author Eddie Morra (Bradley Cooper; The A-Team, The Hangover) whose life is radically changed when he meets his ex Brother-In-Law, who gives him a gift of an untested pill which, when ingested, allows the taker to access one hundred percent of their brain function. What follows is a battle to hang on to his dwindling supply and manage his new found skills, as he begins to come to the attention of various unsavoury characters.

The film is fast paced and exciting and the storyline is intelligent and well written, based on the best selling novel The Dark Fields by Alan Glynn. Limitless is directed by Neil Burger (The Illusionist, Interview with the Assassin) who does a superb job. The acting is also very good, and the film stars Anna Friel (Pushing Daisies, Time Line), Robert De Niro (Taxi Driver, Raging Bull) and Abbie Cornish (Sucker Punch), all of whom bring a good deal of credibility to the whole thing.

Also worthy of a mention are the special effects, which are quite something in places and really allow the Blu-Ray to flex it’s muscles. There are lots of clever little devices used which help you to immerse yourself in the experience.

There are several special features included on the disc: Director’s commentary, Alternate Ending, Taking It To The Limit: The Making of Limitless, A Man Without Limits and a Theatrical Trailer.

In summary Limitless is a thoroughly entertaining film and comes highly recommended for a great way to spend a night in.

Limitless is available on DVD