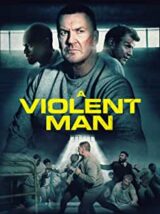 A Man of Conviction.

From writer, actor and first time director, Ross McCall (Band of Brothers (TV Mini Series), 24: Live Another Day (TV Mini Series)) gets it right first time out, with this intense ten foot by eight foot drama. Lead Craig Fairbrass (Guitars, Guns and Paradise!, Rise of the Footsoldier, The Hooligan Factory, Rise of the Footsoldier: Origins) takes this script and takes centre stage as A Violent Man, lives his life in jail. Mesmerizing.

Steve Mackelson (Fairbrass) is in prison for life after killing his wife and her lover, he has no remorse, it is just what he had to do at that time. He is a hard man and has the respect of the prison wing. He leaves them alone, and they leave him alone. That is until he gets a young cellmate in the form of Marcus Wainwright (Stephen Odubola, Blue Story), a kid from the estate where drugs are pushed around and he has been marked as a snitch. Not good for anybody.

There is an uneasy silence at first with Marcus knowing Steve’s background, and he finds it hard to go to sleep. Eventually they start talking to each other, with Steve taking him under his wing.

But it doesn’t take Marcus long to find out what happens when you don’t follow Steve’s rules. There is also an incident that was outside their cell that sees Marcus going into solitary, and Steve getting a nighttime beating off the guards.

His counsellor (Zoë Tapper, Big Boys Don’t Cry, Survivors (TV Series)) urges him not to have any more incidents and also informs him that his now twenty-year-old daughter wants to meet him, but if he says no, it won’t happen.

I will take a life, like you jump a queue.

One person has Steve’s back and that is prisoner Frank Gillespie (Jason Flemyng, Lock, Stock and Two Smoking Barrels, The Iron Mask, Eat Locals) who sorts out anything that might incriminate Steve when he sorts business out in his cell. Life on the inside isn’t easy for anyone, especially if the prisoners and the screws want you.

A Violent Man is a dark, brooding, hard hitting tale of a non-repentant man, and Fairbrass pulls it off stunningly.

A Cracker of a Lockdown Film.

A Violent Man is in Cinemas and on Digital Now.