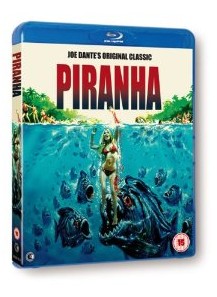 Watching Piranha on Blu-ray is a highly entertaining and amusing experience and for this reason I have given it 3.5 stars.

Not to be confused with the two remakes (Piranha – 2010 and Piranha 3DD – 2012), this is the original version of the film, first released in 1978, and lovingly converted here to Blu-ray format.

Piranha (1978) is directed by Joe Dante (The Howling, Gremlins), a master of comedy horror whose work speaks for itself! It stars Bradford Dillman (Sudden Impact), Heather Menzies (Logan’s Run), Kevin McCarthy (Invasion Of The Body Snatchers), Keenan Wynn (Once Upon a Time In The West), Barbara Steele (The Pit And The Pendulum) and Dick Miller (The Terminator), so plenty of combined experience in the field of 70’s cheesy horror.

For those of you not familiar with Piranha, it is a classic 70’s gore fest. Plenty of teeth, blood, boobs and crazy special effects and sound effects (just wait till you hear what a shoal of piranhas sounds like, I laughed for half an hour) and very much of the era.

There are also plenty of special features on the disc; Audio Commentary, Behind the Scenes, Making of, Outtakes, Stills Gallery and Radio and TV Spots.

If you are old enough to remember this film the first time around then you will love seeing this cult classic on Blu-ray. The conversion is extremely well done and will make this a welcome addition to your retro Blu-ray collection.

I feel that this is probably the audience at which Piranha is aimed, but it may well be good enough to attract a few new fans too, go on give it a try, you just might like it.

Piranha is available to buy from today on Blu-ray.