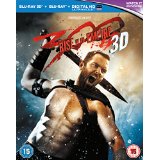 This is director Noam Murro‘s first real foray into the big time blockbuster and he has done a decent job of a big act to follow film after the mighty 300 (Zack Snyder, Watchmen). Set at the same time as Leonidas’ brave attempt at stalling the mighty Persian army, lead by the God King Xerxes, (Rodrigo Santoro, 300), this time it is to take place on the seas around the Greek Islands.

The 3D in this film lends a lot to the grand scale of the Persian Empire and the sea battles as it gives you depth of field rather than the cheap shots of in your face films, but do bring a hanky to wipe the gouting blood off your glasses.

This time the main character is Themistocles (Sullivan Stapleton, Gangster Squad). Whilst battling the Persians on a shore he takes the bull by the horns and fires an arrow at King Darius (Igal Naor, Green Zone), but immediately realises that he should have shot his son the young Xerxes.

Leonidas lies pierced by Persian arrows along with the rest of the 300 and Xerxes is as pleased as punch to take the leader of the Spartans’ head.

As he marches on the war path towards Greece, who have the only democracy, they argue amongst themselves at what the right move will be, but Admiral Themistocles knows better and the Persian Navy with their massive ships and superior numbers must be stopped. But the Persian commander Artemisia (Eva Green, Casino Royale)

rules her navy with an iron rod and does not accept failure from anyone especially her subordinates.

The action takes place on land and sea and we find out how the God King Xerxes became what he is now, as we find out who is behind him.

The Greek ships are much smaller than the Persians’ battleships but they are far more nimble and with free people pulling on the oars, they want to stay free so pull on them with the purpose of that, rather than the slaves of the Persian ship who row to the lash. There is death on all sides as they are cut by the Greek ships and their swords and shields.

Using his local knowledge of the islands, Themistocles lures Artemisia’s generals into traps as they try to whittle down the number of ships. He realises that to beat them he must unite all of Greece and have their aid, even though this means dealing with Queen Gorgo, (Lena Heady, 300).

There no doubting the bravery of the Greeks as they harass the Persians from all angles and take the battle to their foes.

A great fun film to get the popcorn out to as you dodge the blood flowing from many a slow-mo death shot, with limbs flaying all around the screen.

With a plethora of special features on the Blu-ray’s this is a great title to add to the story of the Greeks and Persians.

(A New Breed of Hero)

(Taking the Battle to the Sea) 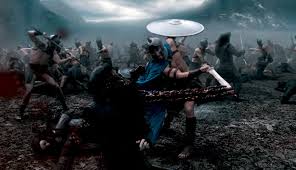