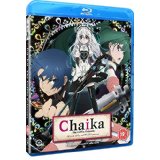 Coffin Princess Chaika is based on the light novel series of the same name by Ichirō Sakaki and directed by Soichi Masui. It was adapted into a two season anime, this is the complete first season.

Toru Acura is a former saboteur living in a post war world where peace has reigned for five years.  A once proud warrior, he suddenly finds that in peacetime his skills are pretty much useless. 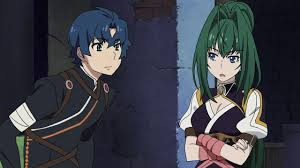 All that changes one day however when he bumps into a young white haired girl in the woods. She is carrying around a coffin with her, which is ungainly but she refuses to give it up at any cost. When the pair are attacked by a rampaging unicorn he finally has a chance to exercise his fighting skills and she reveals herself to be a wizard, whose weapon, a Gundo Sniper Rifle is concealed in the coffin. 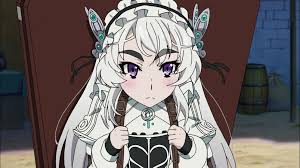 Chaika also reveals her identity as the daughter of the Emperor Gaz, the tyrannical leader of the Gaz Empire, finally defeated by eight heroes, thus bringing the war between them and the six allied nations to an end. His body was cut into eight pieces and distributed among the heroes who defeated him.

Chaika has made it her mission to recover all of the parts of her father’s remains so that she can give him a proper burial. Along with Toru and his saboteur sister Akari, they set off to find her father. 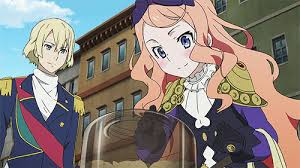 There is a problem however, the artifacts also happen to be extremely powerful sources of magical energy and thus highly sought after by many for a variety of reasons. The Kliemann Agency and a group led by Alveric Gillet are always hot on their heels, and as it turns out, Chaika may not be as unique as she first thought. 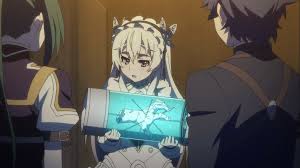 Coffin Princess Chaika is a very enjoyable anime, with a strong and interesting plot and a host of well developed characters who are very easy to relate to. I found myself quickly drawn into the world and eagerly anticipating each episode.

I am unsure as to why this has been given an 18 certificate, there is certainly plenty of violence, but I have seen far worse with a 15 certificate on it, it seems a bit odd.

I would thoroughly recommend adding this to your collection and I look forward to season two.

“I must become steel. Steel wavers not and steel must never doubt. In the face of an enemy I am devoid of hesitation for my body is a deadly weapon with the power to exterminate such foes.” 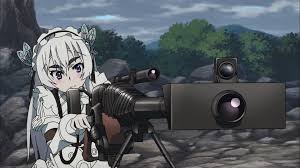 Coffin Princess Chaika is available to buy now on DVD and Blu-ray.