4 Stars for the Magi in Need of friends. 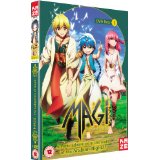 This series is set around the premise of the old tales of the Arabian Nights.

The series is charming and very well animated with beautiful backdrops and great fight sequences but this is another one of those anime series that I think the BBFC misunderstand.

This has a classification of 12 but through the whole series there are visual references to prostitution, slavery, mindless cruelty, domestic violence, nudity and breast fetish (male or female).

Do not get me wrong, this is a great series and I highly recommend it, just be aware of the cultural differences in classification. 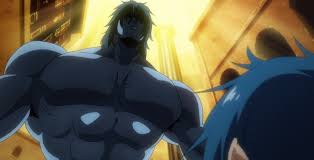 Aladdin is a young boy, (around 13) who has lived his life locked away in seclusion, his only company is a giant blue person called Ugo, who tells Aladdin that he can grant him one wish.

Ugo grants him his wish and he is freed from his imprisonment and he takes his naivety out into the world of sun and cruelty.

Now carrying a metal flute with a strange 8 pointed star upon it, hung around his neck, he finds a cart full of lush fruit and he starts to feed his hunger. 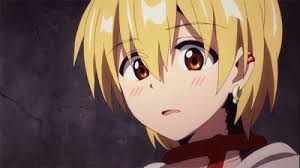 This ruins all of Alibaba’s hard work, as he works for the local Lord Jamil to supply the house hold with goods for his parties.

Scolded for his troubles Aladdin and Alibaba are thrown together much to the annoyance of Alibaba who has dreams of becoming a Dungeon Capturer, as 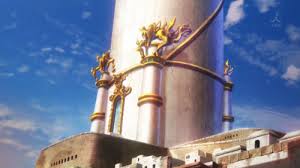 this would bestow him with great wealth and a magical item called “Metal Vessel” which is infused with the great power of the Djin that resides at the centre of the castle dungeon. Alibaba tells Aladdin that these dungeons appeared 14 years ago and the local one appeared only 10 years ago and it is his greatest ambition to conquer it.

They keep coming across a pretty red headed girl who is in chains, he finds out that her name is Morgiana and Alibaba 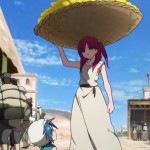 tells Aladdin about slaves. Aladdin uses his metal flute and suddenly the girls shackles shatter but she doesn’t run, Alibaba explains that not all chains can be seen.

Alibaba hides his past and his belief that he is not worthy of greatness, but when on a caravan transporting casks of wine and slaves the train is attacked by a huge plant from under the ground. This destroys the road and a little slave girl and her mother are thrown in to the maw of the monster. Without thought of danger to himself or the fact that disobeying his handlers orders means a life of enslavement or execution, Alibaba throws himself into the hole and tries to save the girls. He fights in vain until Aladdin and Ugo lend a hand.

They are victorious and this is when they decide to take their lives into their own hands and head off to the dungeon on Aladdin’s flying turban. 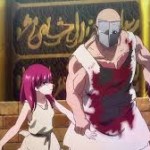 But they are followed into the dungeon by Lord Jamil and his slaves Morgiana and a hulking man armed with a sword called Goltas.

The series has a lot of stories running alongside it and in the background as many people want to be Dungeon Capturer’s and how they will use the wealth and the power of their Djin powered metal vessels.

The ever expanding Kou Empire are trying to take over the whole Country under the guise of unification.

Those who live well below the breadline find life even 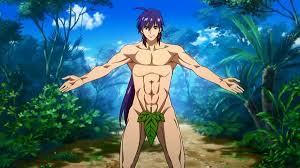 harder under the rule of a misguided Abhmad who has no interest in those below him, only his own wealth and those of the already wealthy. Dark secrets will appear and people will band together from all around the globe such as the famous Sinbad the conqueror of 7 dungeons.

This is a story of a young boy that has a lot to learn about himself and the world surrounding him. 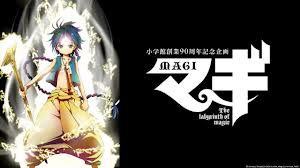 Available to Buy on DVD and Blu-ray on the 24th Feb.

Check out the Official Trailer below.