4 stars for this intriguing and complex sci-fi animation. 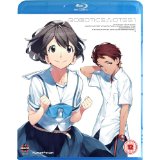 Robotics; Notes is based on a visual novel, which was made into video games across various platforms and subsequently converted into both Manga and anime.

Set in the fictional town of Tanegashima, the anime tells us the story of Kaito Yashio and his friend Akiho Senomiya, who are the sole members of the Tanegashima High School Robot Research club. 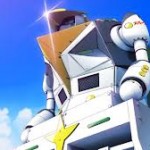 Their goal and Akiho’s dream is to complete the giant robot, Gunvarrel (named after the in-series anime), a project originally started by her sister Misaki, before she left for Tokyo. Kaito tries to help, but all he is really interested in is playing Kill-Ballad, his favourite fighting game.

Both of them suffer from Elephant Mouse Syndrome, brought about by the mysterious SS Anemone incident. In Akiho’s case, it causes a comatose state as time slows for her, experiencing a few seconds over several minutes. 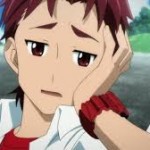 For Kaito, time speeds up, causing him to experience several minutes over the course of a few seconds, making him appear to have super human reactions.

In order to keep their club status, they must win the Robo-One Championship. Kaito becomes far more interested in this goal when the creator of Kill-Ballad, Frau Kojiro, gives him permission to use her controls for his robot and later comes to find him in order to help her with a problem. 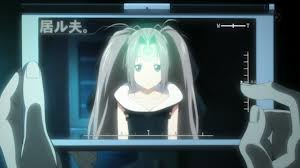 There are many other facets to the story, as Kaito meets Airi, an A.I. who exists within the IRUO servers, created by Ko Kimijima. Airi and her counterpart Gezi can only be viewed by looking at them through a PhoneDroid. Airi chooses Kaito as her point of contact because he is of a similar age and she begins to lead him towards unearthing each of the Ko Kimijima reports which he had concealed before his death.

The animation style is nice, colourful with great backdrops and plenty of cute robot fighting action. Especially impressive are the PhoneDroids, which can superimpose images over any background.

Although it all seems a bit disjointed at first, as the story moves along they very cleverly manage to begin tying in all the different elements and a startling and very unexpected bigger picture starts to emerge.

Excellent so far, I would thoroughly recommend this and I am really looking forward to Part 2.

“Only if you beat me at Kill-Ballad….”

Robotics; Notes Part 1 is available to buy now on DVD and Blu-ray