4 stars for this strangely compelling food based anime. 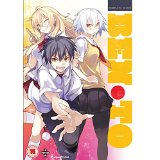 Ben-To is based on a light novel of the same name written by Asaura and illustrated by Kaito Shibano.

Yō Satō is a young man just starting his first day at a new school. It is a boarding school which only serves breakfast, so cheap food is an extremely useful, if not essential, commodity.

However he will soon learn that getting it is not as easy as he thought. After his first trip to the supermarket leads to him being knocked unconscious with no memory of what happened, he is moved to seek out a strange girl who motioned to him from outside.

When he does manage to find her, she turns out to be Sen Yarizui (known as the Ice Witch), the leader and only member of the Half-Priced Food Lovers Club, whose goal is to compete for and win half priced Bento. He signs up, along with his new friend Hana Oshiroi, who is a crazy little girl who is writing a novel (mostly based on Satō, who she calls Saitō in her stories).

She begins to train them in art of Bento Brawling, a traditional daily fight in supermarkets across the city, with a very strict set of rules. 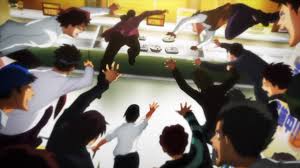 The Bento Brawlers call themselves Wolves, hunting in various sized packs, of which there are many, with great rivalry between them all. Each fighter is eventually awarded a nom de guerre, something which displays their status among Wolves and which Satō would love to attain.

This is a great idea for a story and is far more compelling viewing than I would ever have expected it to be. It is another 15 certificate and again contains quite a lot of sexual innuendo, nakedness and some militant lesbianism. 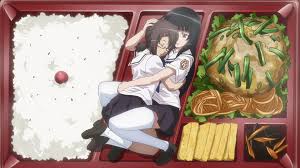 A word to the wise, do make sure that you have eaten before you start to watch Ben-To as each episode is named after the Bento that will be targeted this time, and they sound so delicious that they are guaranteed to make you hungry. Who could resist Hamburg Steak loaded with Garlic Chives Bento 765 kcal or Large cheese pork cutlet curry rice 1080 kcal?

Brilliant and thoroughly entertaining, I would highly recommend adding this to your anime collection. 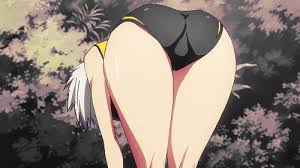