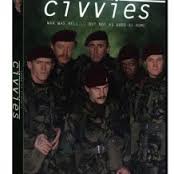 Fifteen years in the army and the last five spent in Northern Ireland from 1987-1992.

Frank Dillon, (Jason Isaacs – Harry Potter) walks away from his barracks with a check for £5000 in his pocket as he heads for civvie street, he heads for home to his long suffering wife Susie (Elizabeth Rider – Brothers of the Head) but he heads for his real home the pub where his old squad hang out. They are soon in trouble taking revenge on those they blame for the troubles. 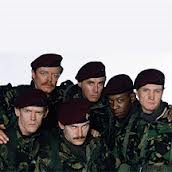 But appears that loyalty is a lot stronger than the felling he has for his familly and he is soon trying to help an old mate who has plenty of problem Stevie Harris (Petter Howitt – Sliding Doors).

Jimmy Hammond (Edward O’Connell – Back Up, Tv 1997) another old army mate works for the local dodgy geezer Barry Newman (Peter O’Toole – Lawrence of Arabia). But Frank doesn’t want anything to with this man.

So he has to sign on or find work in other areas all the whilst having to look after Stevie and having to put up with his mates resentment of Stevie, which all comes to a head in episode three.

This is a Hard as nails series showing the struggles the people heading for civvie street go through as the try  to come to terms that their life is no longer structured.

The acting is ace especially Peter Howitt as Stevie, it would have driven me wild trying to act like that. “Just Brilliant”.

This caused a storm when it was first aired in 1992, it as poignant now as it was then, the field of operation is the only difference.