4 Star Super Saiyan’s vs the rest of the galaxy. 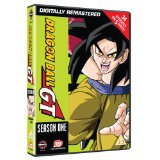 This is the third instalment of the DragonBall and GT takes place in the same universe as series two but it does not follow the manga but has all the old characters. First aired in 1996 and in the US  2003.

Goku and Uub have been training inside Dende’s lookout and as they wreck the place Emperor Pilaf uses this as a distraction and climbs into the inner chambers where he discovers the Black Star Dragon Balls, he dreams of what he do with that power as Goku and Uub say their fond farewells. 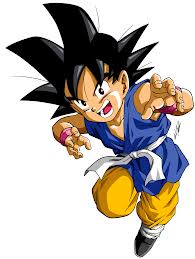 Goku stumbles upon Pilaf who has summoned the dragon, he is annoyed at being interrupted and finding a grown up Goku and the trouble that would be in fighting him inadvertently wishes that he was small again.

With the bargain struck the dragon leaves and the dragon balls disappear.

Unperturbed at being young again he resolves to grow up again, much to the dismay of his wife and children. But this feeling is shattered when King Kai informs them that if the seven dragon balls are not returned to the planet where the wish was made, it will explode.

Pan now looks older than here grandfather and finds it 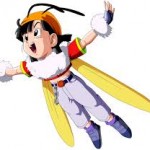 extremely irksome as do most things, (like bank robbers spoiling her date).

To retrieve the dragon balls they need a spaceship, Trunk’s has grown and is now in charge of Capsule Corp 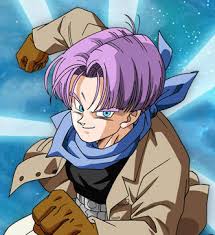 and as Bulma makes arrangements for the departure the decision is made that it should be Goku, Trunks and Goten, but Pan has her own idea and sneaks aboard the ship and hits the ignition button starting their journey to the stars.

What ensues is Fun, Mayhem with death and Destruction thrown in as only the Saiyan’s can.

They fight giant insects, dancing brothers and giant robots and the mysterious Dr Myuu who has a dark secret that will threaten the whole of humanity even though it is going to explode in a year.