3 stars for this futuristic sci-fi anime. 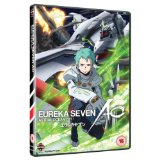 Eureka Seven: AO Astral Ocean Part 1 is the sequel to the original series, Eureka Seven. In this universe, the history of mankind has been drastically altered by the arrival of the Scub coral, which in turn attracts “Secrets” (called “G-Monsters” by the Okinawans). 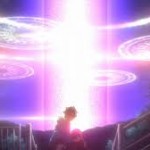 These enormous geometric beings wish to destroy the Scub coral and in the process cause an explosion of great magnitude, known as a Scub Burst. These cause massive damage and loss of life and so an organisation has been set up, known as Generation Bleu. Their aim is to remove the quartz from the heart of the Scub coral, thus making it undetectable to the Secrets. Eureka Seven: AO is set in 2025, in the prefecture of Okinawa and deals with the ongoing battle between Generation Bleu and the Secrets. 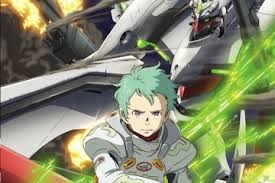 Enter our hero, Ao Fukai. As he is walking with his friend, Naru, they accidentally become caught up in the latest battle. At this point, Ao gains control of an I.F.O. (Intelligent Flying Object) named Nirvash, a powerful mecha which, it seems, only he can operate. As the mecha recognizes him, Ao realizes he has stumbled upon a life-changing discovery. The mecha belonged to his Mother Eureka, and so he joins Generation Bleu to try and learn more about his origins.

He becomes a member of team Pied Piper, along with Fleur (piloting the Alleluia) and Elena (piloting the  Kyrie). Together they must bring the fight to the Secrets and try to discover the identity of the mysterious “Truth”. 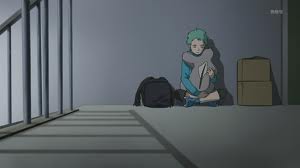 The animation style is gorgeous to look at, very well drawn with great attention to detail. This is also a really good idea for a story, although I have to admit to being a little bit disappointed. It is not nearly as gritty as you would expect from something based on Mecha. It is probably best described as Sci-fi for girls, as all the I.F.O.s except for Ao’s are piloted by young girls (they can only be piloted by children), no males in sight. And for some reason, Ao is permanently accompanied by a three toed Sloth called Noa who, although cute, really has nothing to bring to the party.

All that being said, however, Eureka Seven :AO is still pretty compelling viewing and well worth a look and I am looking forward to Part 2.

“Hear the cry of the children of the stars”