4 stars for this charming and energetic anime. 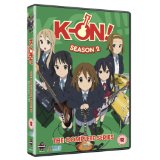 After its rescue in the first series the Light Music Club is still going strong. Even better, the club advisor and music teacher, Sawako Yamanaka, is now the home room teacher of the eldest four members and has arranged for them all to be in the same class.

However, now they are seniors, Yui, Ritsu, Mio and Tsumugi will all be graduating at the end of this school year, leaving the youngest member, Azusa, to be the only member of the club left, unless they can find some new recruits before the year is out. This means that the current band, After School Tea Time, will also probably be in it’s final year.

K-On! is a true slice-of-life series, which follows the senior year of these teenage friends and how they deal with the prospect of moving on into the big wide world and of leaving behind their good friend Azusa. 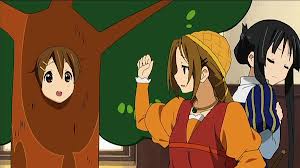 There are plenty of issues to deal with in their final year of school, career choices, picking a school to move on to and of course the final school festival performance (in which they also perform Romeo and Juliet – hilarious).

As always with K-On! it’s a fast paced hectic whirlwind of music and crazy teenage girl antics, interspersed with the odd bit of studying. All the girls are passionate about their music, but more interested in tea and cake than practicing.

Also available as a handy excuse for goofing off this year is the club’s new mascot, Ton, a very cute pig nosed turtle who swims around in the background quite happily. 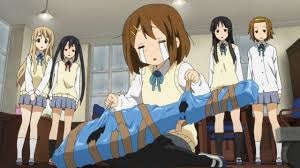 This might have been a 5 star release, but the format is a little confusing and didn’t really need to be. The first 24 episodes are the series as originally aired, but the final 3 are extras. This is all very nice, but they’re tacked onto the end with no clue as to how they fit into the story. 25. Planning Discussion! is set just after episode 21, 26. Visit! is set just after episode 22, and 27. Plan! is set shortly before episode 14. (To watch the results of this episode see K-On! The Movie).

Ignoring all that though, K-On! is thoroughly charming and heartwarming, very funny and relaxing to watch, although there were tears on several occasions, but in a good way. Highly recommended all round, just make sure you watch the episodes in the right order!

K-On! is available to buy now on DVD.