0.5 Star of the most annoying thing I have ever had the misfortune to watch; Ever!

From the very first sketch it became obvious that this was not my cup of tea, it rubbed me so up the wrong way; unfortunately this did not change through two seasons.

Maybe it’s because the characters created by the writer, creator and lead actor Fred Armisen (Saturday Night Live) and his co star musician/singer Carrie Brownstein (Some Days are Better than Others) and fellow writer are set in the PC 90’s that they become so irritating as they take every situation they portray to the ninth degree.

By the second season I wanted to smash the telly, (but it’s not the telly’s fault I remembered) so just wanting to rip my eyes out and fill my ears with hot tar 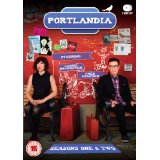 What ever happens at the start of the show is the continuing thread through the show, but even this gets rehashed through the two seasons i.e  a phone shop sketch rehashed as a restaurant sketch.

The only reason it rates a half a star is that Jeff Goldblum (ID4 Independence Day) lifts the ‘Knot’ sketch.

Despite all these people they do nothing to drag this soggy annoying effort off the dirty floor.

I’m thinking of booking my holidays, where shall I go? “Portland”. No, Amityville would be preferable.

Which is about the only annoying sketch this pair didn’t do, so thanks for that.